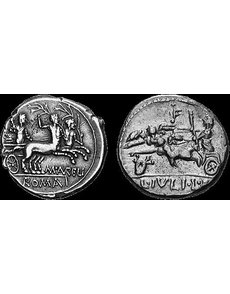 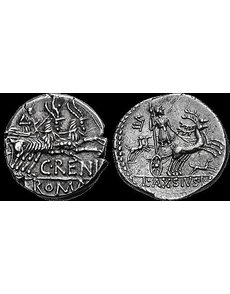 Chariots are drawn by common animals on these denarii: Juno Caprotina with goats on an issue circa 138 B.C., above left, and Diana with stags on a coin issued circa 70 B.C., above right. 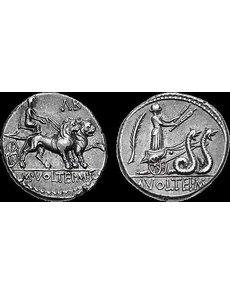 Chariots are drawn by exotic animals on these circa 75 B.C. denarii by the moneyer M. Volteius M.f.: Cybele with two lions, left, and Ceres with two snakes, right. 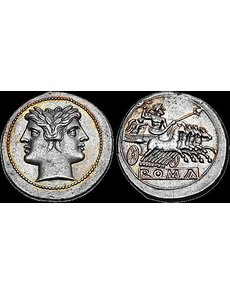 Jupiter, accompanied by Victory, drives a four-horse chariot (quadriga) on this quadrigatus-didrachm struck circa 225 to 214 B.C., during the Second Punic War.

Though the Romans no longer used chariots on the battlefield by the time they began to appear on Roman coinage late in the third century B.C., these iconic vehicles remained a familiar design on coins of both the Roman Republic and Empire.

On coins, chariots usually are drawn by two horses (a biga) or four horses (a quadriga), and occasionally by three (a triga). Typically they are shown in profile, moving at full speed, though sometimes the horses are shown rearing, prancing or standing. In almost every case the driver is a deity or a ruler.

A chariot first appears on Roman coins produced during the Second Punic War (218 to 201 B.C.), when Hannibal’s armies ravaged Italy. Most were silver didrachms, though there were rare emissions of drachms.

On these coins the chariot is driven at full speed by the supreme Roman god Jupiter, who is accompanied by a small figure of Victory at his side. Though the obverse of this issue is quite attractive, showing the faces of the Dioscuri in a “Janiform” composition, the reverse made the greater impact: the name this coinage is familiarly known by is the quadrigatus, derived from the quadriga driven by Jupiter.

They may have been known by this name at the time of their issue, as Livy, when writing his monumental history of Rome some two centuries after the coins were issued, called them quadrigati nummi.

The chariot next appeared on Roman coinage in about 195 B.C. This time the chariot made its debut on the denarius, a small coin that by then had become the standard silver coin of the Roman world. In addition to appearing on a new denomination, the chariot appeared in a new scene, of a biga driven by the moon-goddess Luna, identified by a crescent moon before her head.

Bigas driven by Luna appeared regularly on denarii during the next four decades, and it was not until 157 or 156 B.C. that any new chariot type emerged — this time with Victory driving the biga.

The next change occurred in about 144 B.C., when a denarius portrayed a quadriga driven by Jupiter — a type that had not been used since the quadrigati-didrachms of about 70 years before.

By the late 140s B.C., when chariot scenes had become the dominant reverse type for Republican denarii, the men responsible for issuing coinage at Rome (moneyers) began to promote their families with the use of original coin designs. Nonetheless, chariots remained popular on denarii, and were portrayed with an even greater variety of divine drivers, including Juno, Diana, Victory, Hercules, Jupiter, Sol, Mars and Apollo.

Far more interesting than the variety of drivers was the range of creatures shown drawing the chariot. Creatures other than horses were used for the first time in about 143 B.C., when denarii showed the goddess Diana in a chariot drawn by two stags. We have no explanation for this innovative type since it was issued anonymously.

The Diana-stags type was also used on later denarii by the moneyers C. Allius Bala (circa 92 B.C.) and Lucius Axius L.f. Naso (circa 71 B.C.), and even though these moneyers are known, the historical context of their coins are just as mysterious as the earlier type.

The next interesting chariot type was struck circa 139 B.C. by the moneyer M. Aurelius Cotta. It depicts the hero Hercules in a chariot drawn by two centaurs, mythical creatures that were half man and half horse, each centaur holding a branch.

This energetic scene may refer to a victory by a member of the moneyer’s family in northwestern Greece, where a contest had taken place between centaurs and Hercules. However, proof of this is lacking.

Family history figures strongly into the next unusual chariot type, a denarius struck circa 138 B.C. by the moneyer C. Renius. It shows the goddess Juno Caprotina in a chariot drawn by two goats with pronounced horns. In this case scholars suggest the moneyer’s family was from the Italian city of Lanumium, as Juno Caprotina was worshipped there.

Not long afterward, circa 125 B.C., denarii of the moneyer Q. Caecilius Metellus Caprarius show a chariot drawn by two elephants. Jupiter, the driver, is crowned by Victory.

This type may refer to a victory scored in 251 B.C. by the moneyer’s ancestor L. Caecilius Metellus against the Carthaginians at Panormus, Sicily, for at that battle he captured the enemy’s elephants and displayed them at his triumphal procession.

In about 103 B.C. the moneyer L. Julius L.f. Caesar struck denarii showing two winged cupids drawing a chariot driven by the goddess Venus Genetrix. In this case the meaning is apparent, for the Julian family claimed descent from Venus through the Trojan exile Aeneas.

The moneyer M. Volteius M.f. struck denarii circa 78 B.C. with two fanciful scenes: the goddess Ceres in a chariot drawn by two snakes with their heads raised high and the goddess Cybele in a chariot pulled by two lions. These coins were issued along with three other distinctive types, all of which seem to refer to celebratory games (ludi). The Ceres type would refer to the Ludi Megalenses and the Cybele type to the Ludi Cereales.

A slightly different version of the Ceres-snakes type was used circa 48 B.C. by the moneyer C. Vibius C.f. C.n. Pansa Caetronianus, and the Cybele-lions type appears on gold aurei struck in 43 B.C. by the praetors L. Cestius and C. Norbanus.

Final mention goes to the moneyer Q. Crepereius M.f. Rocus, who in about 72 B.C. struck denarii that show a chariot driven by the sea-god Neptune, who raises his trident. He holds the reins attached to two hippocamps, mythical creatures that were half horse and half fish. Though the precise meaning of this coin type is unknown, the maritime connection is obvious, especially since the obverse depicts Poseidon’s wife, the sea-goddess Amphritite. ¦