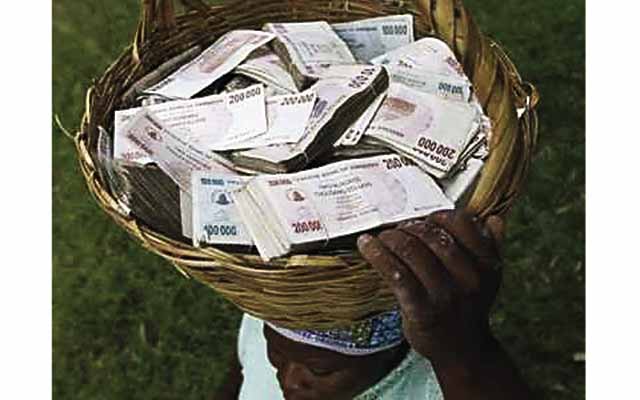 The Central Bank of Zimbabwe announced that starting June 15 it will begin the demonetization of the Zimbabwean dollar.

Want to marry a quadrillionaire?

Anyone who does should get to Zimbabwe before it’s too late, because after Sept. 30 you will be stuck mainly with plain old U.S. dollars or South African rands instead. The Central Bank of Zimbabwe announced that starting June 15 it will begin the demonetization of the Zimbabwean dollar.

Based on wire service reports, Business Insider said on June 11 that any bank account with a balance from $0 to $175,000,000,000,000,000 (175 quadrillion) in Zimbabwe funds will receive a flat payment of $5 in U.S. funds. Balances above that figure will be compensated at a rate of $1 U.S. to $35 quadrillion Zimbabwean funds. Those who did not trust the banking system or hoarded notes for other reasons will get different rates depending on whether the notes they are exchanging were issued in 2008 or 2009.

Unlike the hyperinflation in Weimar Germany, which resulted in mountains of notes of very high values still traded cheaply today, and of which books have been written concerning the cause, the inflation in Zimbabwe is the work of one man, President Robert Mugabe. Mugabe, the nation’s dictator since 1987, said in 2007 “Where money for projects has not been found, we will print it.”

Although the Zimbabwean dollar was essentially abandoned as an official currency in 2009, this will be its official demonetization.