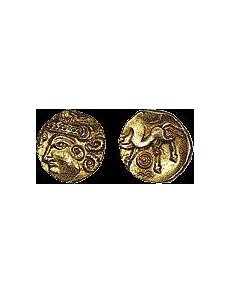 A rare gold quarter stater leads a collection of Celtic coins offered Dec. 7 by Dix Noonan Webb. The coin is one of eight examples known, with five such pieces in the British Museum.

A rare Celtic coin is among the highlights in Dix Noonan Webb’s Dec. 7 auction.

The circa 60 to 20 B.C. gold quarter stater, cataloged as being of the Gallo Belgic Xd type, is one of eight known, five of which are in the British Museum, according to the auction house. The coin, one of many early uninscribed Celtic issues, shows a portrait of a female figure on the obverse and a horse on the reverse.

The coin is a highlight of the Matthew Rich Collection of Celtic Coins, which offers 182 coins from Celtic Britain, an area of numismatics that, until the widespread expansion of metal detecting in the early 1990s opened the field to a wider audience, was rather limited, according to the catalog.

The Celtic coins are just part of the offerings in the Dec. 7 auction, the firm’s 97th sale, which also includes British and world coins, as well as jetons and numismatic literature, for a total of 899 lots.