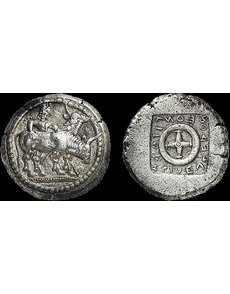 As Hermes stole cattle, the Thracian coin designers “stole” an image from Greek mythology, evidence of the fluid nature of both mythology and coinage.

A Thracian silver octodrachm depicting a Greek legend highlights Gorny & Mosch’s March 10 to 14 auctions in Munich. The coin speaks to growing influence, in the era, of Greek mythology beyond the Greek world.

The Edoni were a Thracian tribe who inhabited the region around the lower Strymon River, east of Lake Kerkinitis, in northern Macedonia. The town of Myrkinos was their chief center. They claimed to have descended from their founder Edonos, grandson of Ares.

The tribe is known only from its coins, and all known coins of the Edoni are in the name of King Getas, whom researcher-author Colin Kraay, writing in Archaic and Classical Greek Coins, suggests is a slightly younger contemporary of Alexander I of Macedon (498 to 454 BC).

The coin features on its obverse Hermes, depicted as a shepherd wearing a petasos (a sun hat common to the region), carrying off two cattle. Hermes reportedly represents the mythical Thracian priest of Hermes, Anax, to whom the Thracian dynasty traced its lineage.

Anax as Hermes on the coin has a completely Hellenized appearance, illustrating clearly how well-acquainted the Edoni had become with Greek thinking, according to the auction house.

In the myth, the day Hermes was born he found a lyre and stole 50 head of cattle from Apollo. When approached about the crime, his mother, Maia, pointed to the peaceful baby in his cradle and claimed he was too young to perpetrate the act. Though Hermes covered his tracks, Zeus had seen the act and told Apollo. Hermes was going to have to return the cattle. Instead, he picked up the lyre and offered it to satisfy the debt. Apollo agreed, and peace between the gods was restored.

The reverse of the coin shows a four-part incuse box with a wheel.

Researcher Kraay suggests that this exceedingly rare type, with a reverse inscription translating as “a coin of Getas, King of the Edonians,” is the earliest Edoni coinage.

Getas, who had this coin minted, was one the most powerful rulers in Macedonia. He was a contemporary — and rival — of Alexander I, king of the Macedons. Getas ruled a territory with immense natural resources, including both the silver and the gold mines in the Pangaion Hills. The silver from there was used to mint the large octodrachms.

It is still unclear why the coins were issued, as they weren’t suited for the local retail trade, the auction house said.

Many specimens were found at places that were ruled by Persians in the days of Getas.

Kraay believes the coins were struck to pay Persian tribute, between 513 and 479 B.C., as Persian troops had tried to gain control of rich northern Greece around that time.

After their victory over the Persians in 476 B.C., the Athenians tried to gain control over the same treasures. The Edoni got caught between two enemies, the Macedonian king on the one side and the Athenians on the other side. In 424 B.C., the last Edonian king died and the Edoni disappeared into history.

This coin, which has a pre-sale estimate of ?75,000 ($102,518 U.S.), remains a vivid piece of history, a testament to the blending of Greek and Thracian culture as reflected through coinage. ¦