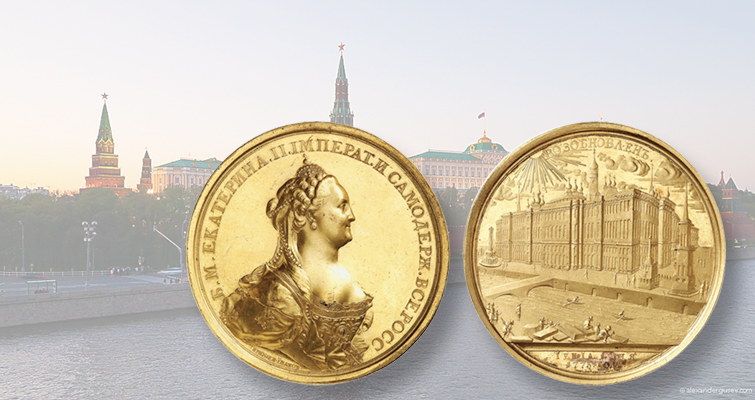 A rare medal of Catherine II (the Great) was issued to celebrate a planned reconstruction of the Kremlin in Moscow. This gold version is apparently a 19th century restrike.

After fire destroyed buildings at the Kremlin in Moscow in 1763, Catherine II (“the Great”) made plans to rebuild.

The efforts Catherine began would take decades, long outlasting her reign, and in 1773 a gold medal was issued to commemorate the inauguration of the actual reconstruction.

An example of this medal, probably a later restrike from the 19th century, is offered in Fritz Rudolph Künker’s auction No. 306 on March 22.

It features the empress on the obverse, with a view of the Kremlin on the reverse.

The massive medal measures 64.45 millimeters in diameter and weighs 125.98 grams, the equivalent to 36 ducats.

Catherine II wanted a new imperial residence in Moscow, and in 1768, the architect Vasily Bazhenov was commissioned to plan the construction work.

Bazhenov first investigated the Kremlin’s old buildings and in the following years created several wooden models of his own plan. The first excavation work and dismantling of older buildings was carried out.

The project was slowed by a plague epidemic in 1771 and by the time-consuming long-distance correspondence between Moscow and St. Petersburg 394 miles away. Even the finished wooden model had to be transported, in the winter of 1772, to St. Petersburg to be blessed by Catherine II.

The solemn inauguration of the project was held June 1, 1773. It was celebrated with 20 buckets of vodka and 40 buckets of beer, among other gustatory fare.

According to the auction house, the project was halted in 1775, overshadowed by work on the Palace of St. Petersburg, and crippled financially by excessive construction costs.

Several years later, a previously demolished wall was restored on the banks of the Moscow River, but in 1812 after Napoleon seized the Kremlin, he ordered its destruction after his departure.

Three days of explosions created much damage, but wet weather halted further ignitions, leaving enough of the structures to allow for reconstruction that began again later that decade. 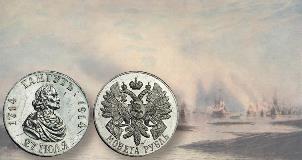