Carthage and its coins 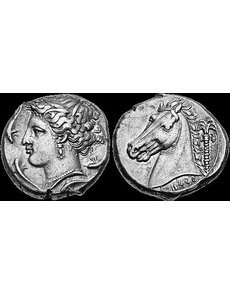 The designs of this “Siculo-Punic” tetradrachm of late in the fourth century B.C. were copied from issues of Syracuse, the most powerful Greek city in the region.All images courtesy of Classical Numismatic Group. 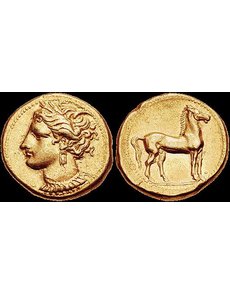 This electrum stater of Carthage dates to circa 310 to 270 B.C. It shows on its obverse the wreathed head of the goddess Tanit and on its reverse a standing horse. 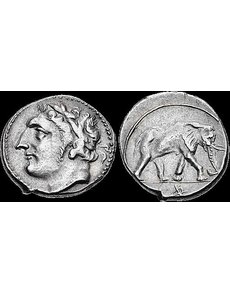 Struck during the Second Punic War, this silver shekel portrays a war elephant and a youthful, laureate head that may be the god Melkart or the famous general Hannibal. 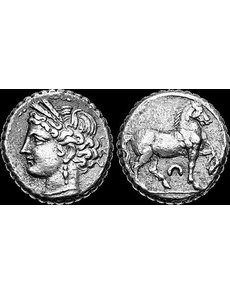 This billon double-shekel, with its unusual serrated edge, was struck circa 149 to 146 B.C., during the last war between Rome and Carthage. It shows the goddess Tanit and a horse.

As one of the great cities of the ancient world, Carthage witnessed its share of successes and failures until, in 146 B.C., it was destroyed by the Romans.

Even so, its ideal location and sheltered harbor allowed the city to return to importance. By the first century A.D. it was again large and prosperous, and it remained a key city of the Roman Empire until it was conquered by the Vandals some four centuries later.

Carthage had been founded late in the ninth century B.C. by colonists from Tyre in Phoenicia, at the other end of the Mediterranean. Those intrepid sailors sought good harbors to support their mercantile interests, and few sites in the Western Mediterranean were as well suited as Carthage.

Furthermore, it was close to Sicily, Italy, Sardinia and Corsica, and not too distant from the Balearic Islands, Spain and Gaul. Being on the African continent, it was also ideal for trade with sub-Saharan Africa, and in time its coastal territories were developed into a rich agricultural belt.

The site had its problems, though. Raids by local Berbers were a constant source of anxiety, and its proximity to Greeks and Romans in Sicily and Italy fueled centuries of warfare for supremacy in the region.

The first Carthaginian coins were struck late in the fifth- and early in the fourth-centuries B.C. at their strongholds in northwestern Sicily. The rest of Sicily was under Greek control, except for inland areas, which still were home to native settlements.

Most of these early “Siculo-Punic” issues were silver tetradrachms and didrachms, though some silver fractions and base metal issues also were struck. These Siculo-Punic coins were associated with Carthaginian efforts from about 410 to 396 B.C. to conquer Sicily. They found considerable success, but the plague affected the Carthaginian armies and brought an end to Carthage’s efforts.

Animosity between the Greeks and Carthaginians continued to run high, with a frequent return to hostilities, into the early third century B.C. Many silver coins are associated with Carthaginian efforts to defeat the Greeks in Sicily during this long period.

Most of the designs on these coins copy those of Syracuse, the main Greek city on the island. Presumably this made them more acceptable to the Greek mercenaries who the Carthaginians hired to fight in Sicily. Some of the designs are Carthaginian originals showing a horse and a palm tree in various configurations.

In addition to these Siculo-Punic types, the Carthaginians also produced coins at their capital city and at other mints. The era of production was about 350 to 250 B.C. It mainly included gold and electrum staters struck at Carthage and small copper coins struck in Sicily, Sardinia and at Carthage.

On most Siculo-Punic tetradrachms the obverse shows a youthful head of the Greek hero Hercules or a female divinity (Arethusa or Tanit), often surrounded by dolphins. The most common reverse type shows a small palm tree behind the head and neck of a horse, and rarer issues show a horse prancing, trotting, galloping, leaping or standing with a palm tree in the background. A small and remarkable series shows on its reverse a prowling lion with a palm tree in the background.

By contrast, the gold and electrum staters issued at Carthage from about 350 to 270 B.C. all have the same design: the head of the goddess Tanit on the obverse and a standing horse with a palm tree in the background on the reverse. The earliest of these were made of gold and the later ones produced in a mix of gold and silver called electrum.

An extraordinary series of high-denomination electrum and silver coins from the First Punic War is thought to have been produced in Sicily. All bear the usual types of Tanit and a horse with a palm tree, except for a 5-shekel silver coin that shows on its reverse Pegasus in flight.

For the brief period between the First and Second Punic Wars, output at Carthage was minimal, consisting of low-value billon and bronze coinage. However, the Carthaginian mints in Spain produced some simply amazing silver coins from about 237 to 206 B.C.

The precise context of these coins is still debated, but they appear to be from the period leading up to and including the Second Punic War. Several have fresh, original designs, including busts of Melkart (or possibly Hercules) with a club over his shoulder, the decorated prow of a war galley and a walking elephant that sometimes is guided by a rider.

Carthage also produced some interesting coins outside of Spain during the Second Punic War. The most significant of these are small silver coins that may have been struck in Southern Italy or Sicily. If struck at Carthage — which certainly is possible — these coins likely were meant for Hannibal’s army and allies in Italy and Sicily, as that is principally where they are found.

Also belonging to this group are two distinctive issues.

The first are silver coins produced in three denominations that bear on their obverse a distinctive portrait that is Melkart or Hannibal, and on their reverse an advancing elephant.

The second are electrum coins believed to have been struck at Capua, an Italian city that supported Hannibal. They show on their obverse a janiform female head and on their reverse Jupiter and Victory in a four-horse chariot. These electrum coins were obviously inspired by the contemporary “quadrigatus” coinage of the Romans.

The final war between Rome and Carthage was brief and decisive, ending with the destruction of Carthage in 146 B.C. Carthaginian issues for this war are relatively small and recycle familiar designs, though many were struck on planchets with serrated edges — the purpose of which remains a mystery. ■