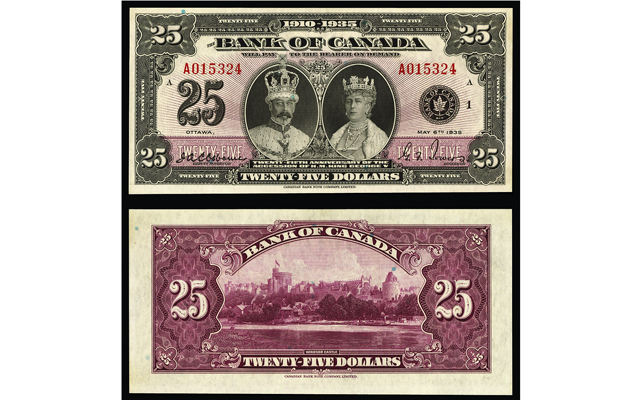 This $25 commemorative note, to mark the silver anniversary of King George V, was issued in 1935 by the Bank of Canada. It is the first of only two commemorative bank notes issued by the bank. 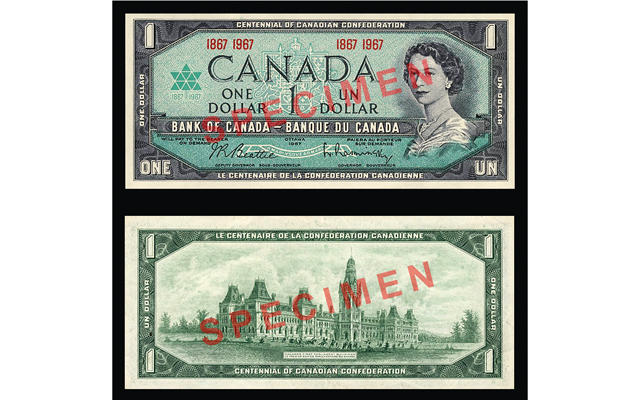 This $1 Canadian commemorative note was issued in 1967 to mark the centennial of the Confederation of Canada.

The Bank of Canada is encouraging Canadian citizens to submit designs for a special polymer commemorative note to be issued in 2017.

The note would mark the 150th anniversary of Canadian Confederation and be issued before the July 1 Canada Day holiday in 2017.

No details about the denomination, number of notes to be printed or security features were provided by the bank.

The bank has established a special website, www.bankofcanada.ca/banknotes/new-bank-note-canadas-150th, through which citizens can offer their ideas.

A questionnaire linked to the website is the format for comments and ideas to be offered.

A news release from the bank states:

“In keeping with the Bank’s design principles, we need input from Canadians. Ideas for themes, subject matter and images will be considered as long as they take the following in to account.
•?They must adhere to our principles for bank note design.
•?They must represent the specific theme for this special note — the 150th anniversary of Confederation.”

Canada has issued only two other commemorative notes. In 1935, $25 notes were issued to mark the silver jubilee of King George V. The face of the note features portraits of King George V and Queen Mary. Under their portraits is the inscription TWENTY-FIFTH ANNIVERSARY OF THE ACCESSION OF H.M. KING GEORGE V.

The back of the note has a vignette of Windsor Castle seen from across the Thames River.

English and French versions of the $25 commemorative notes were printed. The French language notes are rarer than the English notes.

The notes bear the issuance date as May 6, 1935, but the 26th edition of the Charlton Standard Catalogue of Canadian Government Paper Money indicates the banks were instructed to release the notes on May 2, four days before their printed issue date.

The short-lived 1935 series was replaced with notes of Series 1937.

In 1967, to mark the centennial of Confederation, Bank of Canada $1 notes, without serial numbers, were issued with the years 1867 1967 overprinted twice on the face of a modified version of a design used before on the 1954 $1 notes.

The face features a portrait of young Queen Elizabeth II along with the centennial logo, a stylized maple leaf divided into 11 triangles.

The back design features a large vignette of Canada’s original Parliament Buildings, which were destroyed in a fire in 1916.