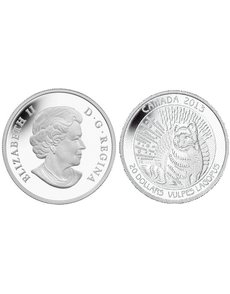 Always curious, ever clever, Canada’s Arctic Fox is a spirited member of Canada’s abundant and iconic wildlife.  As the Royal Canadian Mint continues to push the boundaries of coin design and manufacturing, it has created an innovative interpretation of a typically Canadian theme.  Its newest $20 fine silver coin featuring a contemporary rendering of Vulpes lagopus by Canadian artist Tivadar Bote in a stunning contrast of five different coin finishes.  In a style inspired by woodblock design, the Arctic Fox is set against symbolic elements of its Canadian habitat. Motifs of circles, droplets, and wavy rays rise from the image of a circular sunburst positioned directly behind the image of a fox serenely surveying the Arctic landscape. These design elements symbolize snow, light and even the warmth and brilliance of the sun which are all part of the Arctic Fox’s natural environment. The obverse of this coin features the traditional effigy of Her Majesty Queen Elizabeth II by Susanna Blunt.

This is the first issue in the Royal Canadian Mint’s new Untamed Canada series whose bold artistic direction is accentuated by an unequaled combination of five different coin finishes, each with its own distinct luster.  This dramatic approach to coin design captures the untamed nature of the Arctic Fox and of the many inhabitants of the Canadian wild which will appear in future installments of this exciting series.  With a low world-wide mintage of only 8,500, this coin may prove as elusive as a real Arctic Fox.   Those lucky collectors who can bag one of these treasures will acquire a beautiful, finely crafted keepsake which will stand the test of time as a 99.99% fine silver trademark of the Royal Canadian Mint’s quality, innovation and artistry.

www.mint.ca. It is also available at the Royal Canadian Mint's boutiques in Ottawa, Winnipeg and Vancouver, as well as through its global network of dealers and distributors.