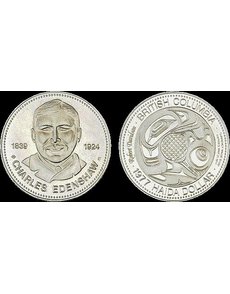 This traditional type “trade dollar” with an expiration date of May 31, 1977, features Haida art on one side and Haida artist Charles Edenshaw on the other. 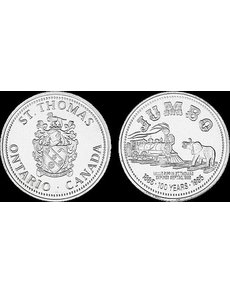 This municipal trade token marks the centennial of the tragic death of Jumbo the circus elephant, who was killed in St. Thomas, Ontario, when accidentally struck by a locomotive in 1885. 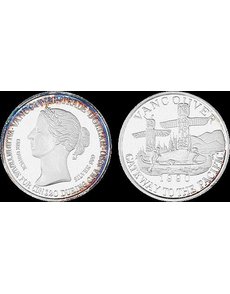 This double-duty $20 municipal trade token is also a 1-ounce .999 fine silver bullion round from Vancouver, “Gateway to the Pacific.” It was issued by the Canadian Numismatic Association. 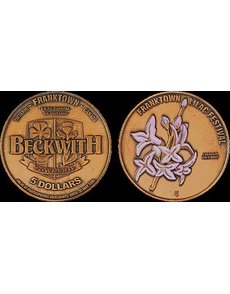 This enameled Canadian municipal trade token was made for the Lilac Festival in Franktown, Ontario. This is the antique bronze finish type, with a mintage of 1,000 pieces. 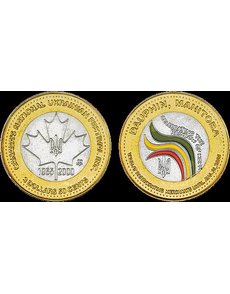 Made for the Canadian Ukrainian Festival “Celebrating the Rainbow of Hope,” this municipal trade token claimed to be Canada’s first to be both ringed-bimetallic and colored. 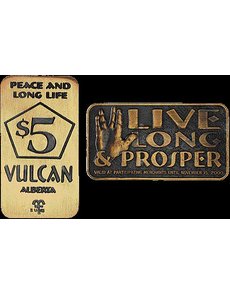 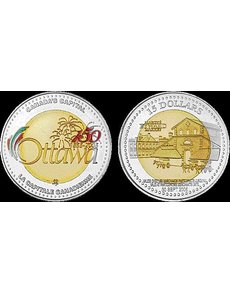 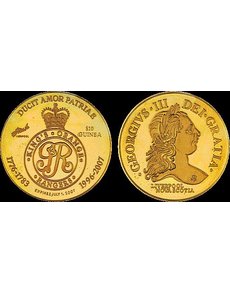 The history of tiny Liverpool, Nova Scotia, is intertwined with the American Revolution through the King’s Orange Rangers and the American refugee loyalists who fled north and settled there. This $10 or one guinea token references that fascinating history.

Municipal trade tokens are born as “coins,” technically, but change into medals.

Until their expiration date arrives, they are authorized as legal tender by local governments. Municipal trade tokens are sponsored by nonprofits and issued as commemoratives and fundraisers by towns and cities all over North America. Once called “trade dollars,” almost 2,000 different municipal trade tokens have been issued in Canada since 1958 in denominations ranging from 5 cents to $10 and up.

Canadian municipal trade tokens are sought by collectors worldwide because of their great number and creative diversity.

They can be found in all kinds of metal from aluminum to silver, and in all sizes and shapes, as well as in Proof, ringed-bimetallic, colored and high relief versions. Cities in other nations issue municipal trade tokens, but no other nation can match Canada’s reputation for innovation in this particular area of exonumia.

Before being bought by P.T. Barnum, “Jumbo” the elephant lived at the London Zoo for 16 years and gave rides to children. Many people mourned in 1885 when the 13-foot-tall African elephant was killed by a locomotive on the railroad tracks in St. Thomas, Ontario. This event was commemorated on a municipal trade token dollar struck in 1985 on the centennial of the accident. The design shows Jumbo’s great size in relation to the locomotive that derailed in the collision and in so doing struck a second elephant, breaking its leg.

An example of a double-duty Canadian municipal trade token is the Proof 1990 Vancouver trade dollar, which is also a silver round bullion issue marked with its weight and purity.

The stated denomination is $20, but, like all rounds, its value would have been tied to the price of silver at the time of issue. Today, when it comes up for auction online at sites like eBay, it typically sells for about 20 percent more than the average silver round, due to its status as a municipal trade token.

Just six years after mint-colorized world coins began appearing in the marketplace from Equatorial Guinea, Uganda and Palau, the first colored Canadian municipal trade token was issued. It came from Franktown, which bills itself as “the Lilac Capital of Ontario.”

The enameled 1998 floral token is an example of municipal trade tokens as promotional tool. What better way to advertise an annual festival all about pink-purple flowers than to issue to townsfolk and tourists a token that is colored pink-purple? Two variants were struck, antique bronze and gold-plated.

The Dauphin, Manitoba, $3.50 token sought to celebrate the “rainbow of hope” at the Canadian Ukrainian Festival. Since 2000, the selectively enameled ringed-bimetallic format has become common for municipal trade tokens.

Vulcan, Alberta, was founded more than 50 years before the first episode of Star Trek aired in 1966 but people don’t think of the ancient Roman god of fire when they hear the town’s name — they think of Mr. Spock.

So Vulcan decided to embrace science fiction in a big way and the tourists have flocked there. The town even hosts an annual Star Trek convention. The municipal trade tokens reflect the theme, as with this $5 rectangular example from 2000 with the Vulcan salute.

Some municipal trade token mintages are quite small, fewer than 50 pieces. However, the number struck is not the only factor to drive demand. The theme and design must be popular too. With a relatively low mintage of 250, the illustrated $15 token from Ottawa has several qualities that collectors look for. It is an enameled ringed-bimetallic piece that commemorates the 150th birthday of Canada’s capital city. The vignettes feature the famous and huge ByWard farmer’s market and a fireworks display.

You can’t collect Canadian municipal trade tokens without learning something about Canadian history and, sometimes, American history, too.

A municipal trade token from Liverpool, Nova Scotia, in a twin denomination of $10 or one guinea from 2007 celebrates the KOR, or the King’s Orange Rangers (that’s King as in King George III), which was a band of loyalists that formed in New York in 1776 but later went to Liverpool to defend Nova Scotia and settled there. ¦