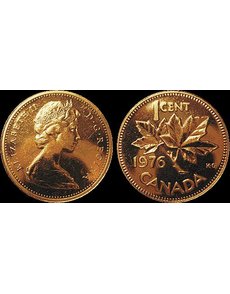 This Prooflike 1976 Canadian cent was recently found in change by a reader. The coin was probably removed from a 1976 Prooflike set and placed into circulation, where it picked up scratches.

Here are pictures of a fun little treasure handed to me at a local deli here in my hometown.

I have had this thing about looking at coins and their dates since I was a kid. When I was little, it was fun to find the Lincoln, Wheat cents, and it still is!

I received this coin recently in change handed to me, and it caught my eye because it was so shiny and also since it was Canadian. But when I looked at the date, I was surprised that something from 1976 would be so bright.

It looks like it may have been Uncirculated or in a collection or something, but I am guessing it’s been circulated a bit before I got it due to the small scratches. What do you think?

Based on your photographs, it appears likely that the coin was cut from a 1976 Canadian Prooflike set. Prooflike coins like this one were part of six-coin sets packaged in plastic sleeves. In addition to the cent, the other coins were the 5-cent, 10-cent, 25-cent, 50-cent and dollar coins.

Somehow your cent then ended up in circulation, which would explain the scratches on the coin that you note.

According to Coin World’s World Coin Values, available with the digital edition of Coin World, a 1976 Canadian cent in Mint State 63 red condition is valued at 50 cents.

From the images, your coin would likely not grade this high. It is, however, acknowledged that the excitement of finding something out of the ordinary in change adds some personal value.

Canada’s cent dates back to 1858, when the coin was first issued by the Province of Canada, before much of the lands that now compose Canada confederated in 1867. The newly joined nation inherited the denomination and Canada’s cent remained a fixture of circulation, lasting a total of 155 years before the Royal Canadian Mint decided striking the coins was impractical. The last day for the coin to be placed into circulation was Feb. 4, 2013.

In modern times, the coin has been struck in a multi-ply plated steel composition with a weight of 2.35 grams.