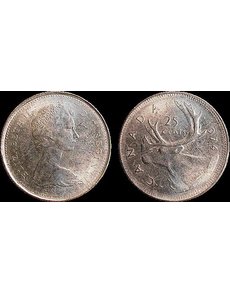 This 1974 Canada 25-cent design was struck over a 1975 5-cent coin. The overstrike was evidently delivered by a pair of counterfeit dies. 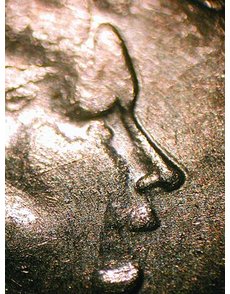 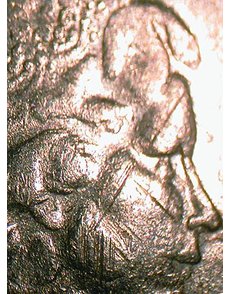 In a second 5-cent coin, overstruck by counterfeit 1975 25-cent coin dies, low-lying areas of the design are missing. 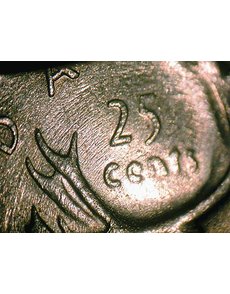 Concentric lathe marks are seen here on the reverse face of a second 5-cent coin that was overstruck by counterfeit 1974 25-cent coin dies. 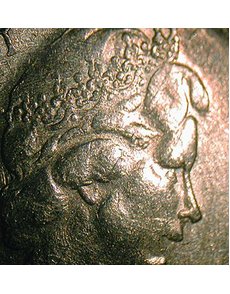 Low-lying portions of the design are also missing on the queen’s head on the second 1974 25-cent coin design from fake dies on a 5-cent coin.

It never hurts to get a second opinion when a coin has been rejected by a grading service as being of “questionable authenticity.”

Such was the determination of Numismatic Guaranty Corp. when confronted with two Canadian double-denomination errors that were submitted by James Zimmerman. Each coin consisted of a 25-cent strike over a 5-cent coin. Upon my invitation, Zimmerman sent both coins to me along with two other 25-cent/5-cent errors that had not been subjected to professional scrutiny.

In each case the 25-cent strike was strong enough to obliterate most of the host coin’s design. Reeding appears normal and the several weights approximate that of a normal 5-cent coin (officially 4.54 grams). Two overstrikes are dated 1974 and two are dated 1975. The host coin’s date can be discerned on only one piece.

After examining all four coins I came to the same conclusion as NGC. While the host coins were presumably genuine, the 25-cent strikes appear to have been delivered by rather sophisticated counterfeit dies.

The example with the visible underlying date was inspected by NGC and is shown here. Surprisingly, the 5-cent coin is dated 1975 even though the 25-cent design is dated 1974. This immediately raises suspicions.

Both faces of this coin show fine, closely-spaced concentric lines that are unfortunately difficult to photograph. Appearing in both the field and the design, they appear to be concentric lathe marks. Concentric lathe marks are an uncommon die error that occurs when the face of a blank working die is not completely polished after machining.

It would be odd indeed for such an uncommon die error to occur in conjunction with a double-denomination error. Furthermore, I’ve never encountered a coin in which concentric lathe marks appear on both faces.

Instead, I strongly suspect that we’re looking at an incomplete hubbing of a counterfeit transfer or impact die. Transfer and impact dies are created by driving a genuine coin into a blank cylinder that has been annealed (heat-treated) to soften it. The false die is then tempered to make it harder than the coins it is intended to strike.

If the coin is not pressed deeply enough into the metal cylinder, low-lying portions of the design will not be transferred.

The second example inspected by NGC is dated 1975. It shows no concentric lathe marks but does show the same pattern of design loss in the low-lying areas of the queen’s bust and the caribou’s head (see photo).

The unsubmitted 1974 example shows strong concentric lathe marks on both faces. The now-familiar pattern of design loss in low-lying areas is well-displayed.

The unsubmitted 1975 piece (not photographed) displays no concentric lathe marks but does maintain the pattern of design loss seen in the other examples.

The evidence would seem to indicate that the counterfeit 25-cent coin dies that struck these 5-cent pieces were fabricated by the same individual.

Why they were fabricated is a matter of speculation. Zimmerman purchased each of these coins as a simple wrong planchet error (25-cent piece on 5-cent planchet). The purchases took place over many years and were acquired from different dealers. All of the coins have circulated to a greater or lesser degree.

Regardless of the striking error, Canadian 25-cent strikes should henceforth be inspected for the warning signs exposed in this column — concentric lathe marks on one or both faces and the loss of low-lying areas of design.