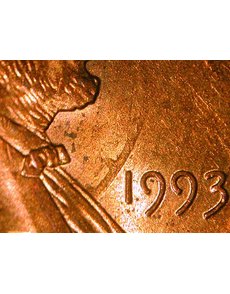 This 1993 Lincoln cent shows a tilted and horizontally misaligned die clash. The clash mark consists of an edge of the field portion of the reverse die face and the letters ERI (from AMERICA). 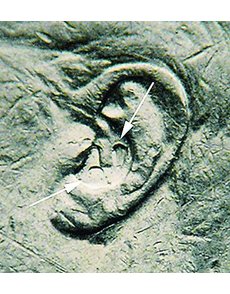 Two sets of dentil clash marks are seen in the deepest part of George VI’s ear on this 1949 Canadian 5-cent coin.

e Diamond and courtesy of maddieclashes.com. 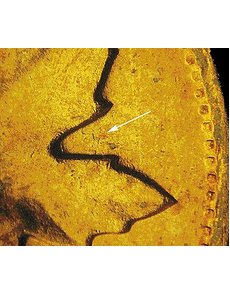 A single set of dentil clash marks is seen on the reverse face of this 1962 Canadian cent. 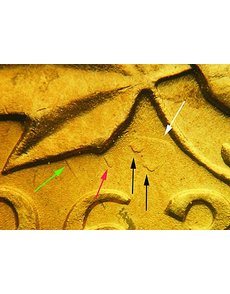 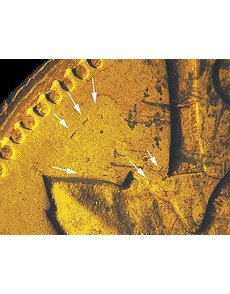 Three sets of tilted and horizontally misaligned clash marks are seen on the reverse of a second 1963 Canadian cent.

Carrying dates from 1991 to 2000, each of these cents features a light die clash involving a hammer (obverse) die that was simultaneously tilted (vertically misaligned) and horizontally misaligned, the latter often dramatically so. Some of the coins also feature a rotation or pivot of the hammer die.

One representative example is the illustrated 1993 Lincoln cent, which is cataloged as MDC-1c-1993-02 on maddieclashes.com. When the dies clashed, the hammer die was tilted down toward the southeast and horizontally misaligned about 25% in the same direction.

The current tally of these “radical MAD clashes” is 27, with a number of additional entries in the “possible” column.

A smaller number of similar die clashes have now been documented among Canadian coins by Robert (“BJ”) Neff, the driving force behind maddieclashes.com.

The earliest example appears to be a 1949 5-cent coin. A double row of clash marks representing the dentils of the reverse die can be found in the center of George VI’s ear. The hammer die (the reverse die in Canadian coins) was tilted down at its southern pole and horizontally misaligned about 50 percent toward the north at the time of the clash. This is one of the few radical MAD clashes in which the direction of downward tilt is opposite that of the horizontal shift. This coin is listed as MDC-CA5c-1949-01.

A small cluster of radically misaligned die clashes occurs among Canadian cents in the years 1962 and 1963. One coin, MDC-CA1c-1962-01, shows a single row of dentil clash marks within the oak leaf notch farthest to the right (see photo). The hammer die was tilted down toward the east and horizontally misaligned about 20 percent in the same direction.

The normal clash mark is represented by a curved line beneath the left lower margin of the maple leaf (white arrow). It represents Queen Elizabeth II’s chin.

The last example discussed, MDC-CA1c-1963-02, shows three sets of dentil clash marks. They are located above and to the left of the maple leaf. The horizontal misalignment ranges from 5 to 15 percent. At the time of the clash, the hammer die was shifted toward the northwest and tilted down in the same direction.

One puzzling feature of both the U.S. and Canadian radical MAD clashes involves the relationship between the direction of die tilt and the direction of horizontal movement. In the vast majority of cases, the directions are the same. In other words, if the hammer die is tilted toward 4 o’clock, it also shows a lateral shift in the same direction.

Exactly the opposite trend is seen in coins actually struck by a tilted and horizontally misaligned hammer die. In these misaligned die errors, the direction of tilt is opposite that of the horizontal shift.

In other words, if the hammer is tilted down toward 4:00, it is laterally shifted toward 10:00. This makes complete sense. As a die tilts down at one pole, it tends to tilt inward at the same pole, presuming there’s no independent lateral movement.

In the case of the radical MAD clashes, tilt and horizontal shift are entirely decoupled. This again supports the idea that the clashes are not taking place during a press run, but prior to or during installation.