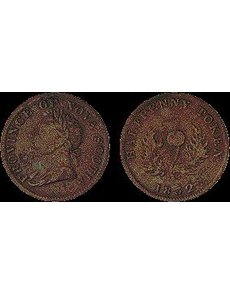 An 1832 Canadian half penny token from the Province of Nova Scotia features the British monarch on its obverse and a Scottish thistle on the reverse. Such pieces were a necessity. 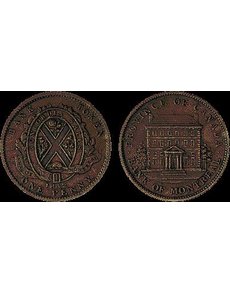 An 1842 Bank of Montreal penny token is from one of several series to feature the bank’s building. Banks and insurance companies have long placed their headquarters on tokens and medals to symbolize the strength and stability of their companies. 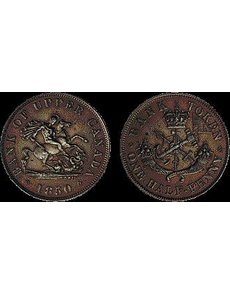 St. George slaying the dragon is the theme of this 1850 half penny token from the Bank of Upper Canada. The design is a staple, used on many British and Commonwealth coins for centuries. 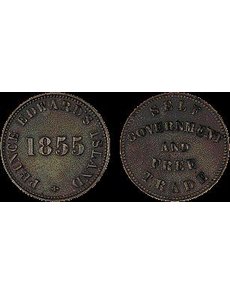 An 1855 Prince Edward Island “Self Government” token reads PRINCE EDWARD’S ISLAND. Today, the apostrophe and “s” are no longer used. It has no denomination, allowing consumers to impart a flexible value. 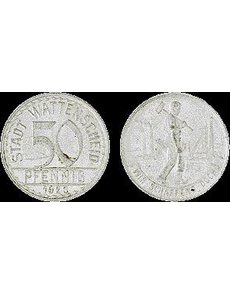 From the city of Wattenscheid, in the German state of Westphalia, this aluminum 50-pfennig notgeld token is well designed and struck. 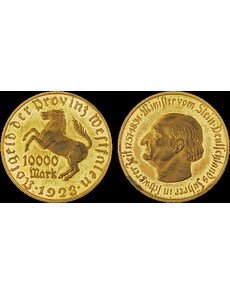 By 1923, no more pfennig-denominated notgeld were being made. This Westphalia gold-plated tombac notgeld token is denominated at a whopping 10,000 marks. 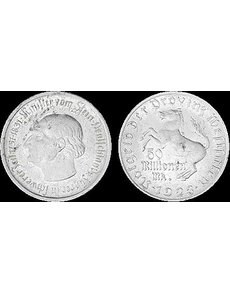 Also issued in 1923, but later in the year, this 50-million-mark notgeld token has the same design as the 10,000-mark version. However, it is smaller and composed of aluminum. 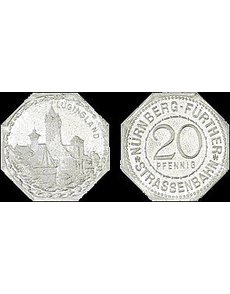 The Bavarian railway and Luginsland Mountain is featured on this 1921 20-pfennig Nuremberg notgeld token. It is the same size as the 50-pfennig token, but worth much less and not as well struck.

In addition to diversity of design, world token coinage makes for a fascinating topical area because of its interplay with history and its vital role in the commerce of many nations.

Two of the most popular types are 19th century Canadian and World War I-era German tokens. The coin shortages eased by these tokens had very different causes but the end result was the same. Everyday cash transactions were made possible until the national coinage system could be created or repaired.

Colonial Canada had a severe cash shortage for most of the 1800s. Neither France nor England, the area’s controlling governments, did anything to ease the problem. Barter wasn’t practical for small purchases; people needed coppers. Half penny and penny tokens came to the rescue.

The colony of Nova Scotia blazed a trail with its Thistle token series in 1814. Although King George IV of Great Britain graced their obverse, they circulated without his permission, thus making them tokens rather than coins. The 1832 issues also lacked a bit of historical accuracy. George’s sibling, William IV, had been on the throne since 1830 but his older brother’s visage was depicted on the tokens.

Various banks issued tokens in addition to colonial governments. The Bank of Montreal was responsible for several series that were known for their depictions of the bank building. Beginning in 1850, the Bank of Upper Canada issued half penny and penny tokens featuring the classic British coin design of St. George slaying the dragon.

Prince Edward Island was prolific about issuing a token series for 30 years beginning in 1830. The pieces include types with legends such as SHIPS, COLONIES AND COMMERCE, SUCCESS TO THE FISHERIES and SELF GOVERNMENT AND FREE TRADE. Some carried no value marking so that consumers and merchants could ascribe the value needed in the areas where the tokens circulated.

After 1870, Canada was issuing legal tender, leading to laws that restricted token usage. However, tokens would return. From 1890 to about 1940, for example, some Canadian merchants issued tokens for common goods like bread and milk and services such as haircuts.

Since 1960, many thousands of municipal trade tokens (formerly called “trade dollars”) have been issued throughout Canada by local governments as “good-fors.” These have temporary local buying power during fairs and celebrations of all kinds. This has become a popular collecting field in Canada and with token collectors worldwide. Even ringed bimetallic and colorized municipal trade tokens are available.

Tokens were a necessity in Germany for reasons that differed from those in Canada. Notgeld, or “emergency money,” was used extensively in Germany and Austria-Hungary during and after World War I. The cost of the war drove up the value of metal, and coins were hoarded as long as their metal value exceeded their stated denominations. Filling the gap this hoarding created was notgeld, in both paper and metallic form but also made from substances as diverse as porcelain, coal, leather and stamps.

Inflation drove the evolution of these tokens in ways that could scarcely have been imagined in 1918. Between 1922 and the end of 1923, the inflation became hyperinflation. Notgeld notes were issued with denominations in the billions of marks.

The suffering of the populace was immense as money purchased less and less by the hour. This horrible history is aptly reflected in the notgeld produced between 1920 and 1924.

In 1920, there were still plenty of tokens with pfennig (penny) denominations such as the aluminum 50-pfennig token from the city of Wattenscheid in the state of Westphalia. By 1921, inflation was picking up steam. The aluminum 20-pfennig token from Nuremberg was the same size as the 1920 Wattenscheid token, but was worth less than half as much. Twenty suddenly became the new 50.

By 1923, people could hardly believe what was happening to their spending power. The pfennig had been replaced by the mark on notgeld, and the number of zeroes was growing almost daily. A 1923 gold-plated tombac (copper-zinc alloy) Westphalia token with a horse design was assigned the value of 10,000 marks early in the year. A few months later, the same horse could be seen again but this time the notgeld was made of a much less expensive metal, aluminum. The denomination was now 50 million marks and would soon transform into 1 billion marks.

In recent years, the currencies of other nations, including Turkey and Zimbabwe, have experienced similar episodes of hyperinflation. Perhaps the citizens of these nations can take solace in the fact that Germany eventually solved its inflation problem and went on to become the present-day economic powerhouse of the European Union. ¦