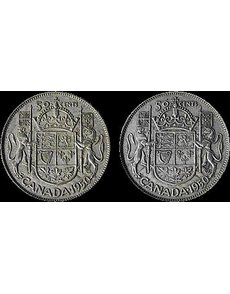 The similarity of the pitcher depicted on the 1992 Olympics dollar to this Nolan Ryan baseball card by Fleer is just one trouble that baseball-themed commemorative coins have brought the Mint.

Enclosed are copies of two Canadian 50-cent coins dated 1950. According to my 2005 “Charlton Standard Catalogue,” they should not exist.

They have design details inside the “0” of 1950 plus a die crack. I collected them 50 years ago as a teen in Canada.

The reader emailed images of the 50-cent coins in question.

The pair illustrates the abundance of die varieties that exist for Canadian half dollars of the era.

According to Henry Nienhuis, president of the Canadian Errors and Varieties Numismatic Association (www.cevna.com), the 50-cent series from the 1940s and 1950s is rife with minor varieties caused by obverse and reverse die breaks and clashing. “This makes variety hunting these coins quite rewarding,” he said.

Nienhuis reviewed the images and determined that one coin is a later die state example of the variety cataloged as F452r by pioneering Canadian die variety expert Hans Zoell in Canada Minor Coin Varieties, third edition, part two (1965). This variety is characterized by the die break from the hoof of the unicorn to the 0 in the date, extending to the lower part of the 5 in the date.

Nienhuis identified the other coin as an early die state example of the variety identified as FL452s, where a mark at the upper bend in the unicorn’s tail has not yet developed. The other characteristic of the FL452s variety is the break from the 0 in the date to the rim.

Zoell’s work in identifying die varieties in the late 1960s and early 1970s remains the basis for attribution, but does not reflect new scholarship. Confusing matters, Zoell changed his numbering sequence from time to time; earlier Zoell editions provide a designation differing from those Nienhuis cited for each of Collet’s coins.

An authoritative, up-to-date reference for Canadian coin varieties does not exist. Collet mentions the book Canadian Coins by W.K. Cross, which is also known as “the Charlton Catalogue.”

The book is now in its 67th edition (and in recent years, has been split into two volumes). Every year the Charlton catalog includes a chapter on varieties of a specific denomination. The 2007 edition highlights the 50-cent coin but does not provide the depth of research available in Zoell’s work.

As an alternative to an omnibus reference, collectors should consult with specialty groups like CEVNA, where hobbyists share enjoyment in finding varieties on coins.