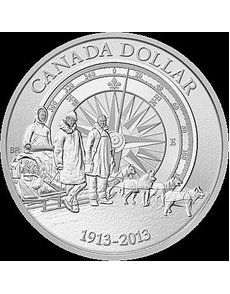 Canada’s newest Specimen set includes, for the first time, a silver dollar. The design of the reverse heralds the centennial of the Canadian Arctic Expedition of 1913 to 1916. 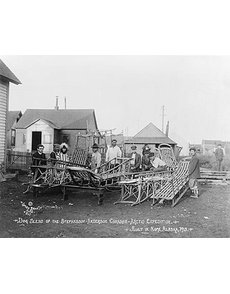 Native peoples pose with some of the dog sleds that were built in Nome, Alaska, for the fateful Canadian Arctic Expedition, in this image from 1913.

A century after a groundbreaking scientific expedition into the Canadian Arctic, a silver dollar celebrating the anniversary is making history of its own.

The Royal Canadian Mint on Aug. 13 released a Specimen silver dollar set marking the centennial of the Canadian Arctic Expedition, which began in 1913 and continued into 1916.

For the first time, a Canadian Specimen set includes a dollar coin in silver. In addition to the Arctic Expedition silver dollar, the new set also includes Specimen finish examples of all seven circulating Canadian coins, from the 5-cent piece to the $2 coin. Previous annual Specimen sets have offered aureate-bronze versions of a dollar coin with a special design.

The expedition was the first major scientific research study undertaken in Canada’s North.

The designs on the Specimen Finish .9999 fine silver dollar carry over from Canada’s annual silver dollar, which was previously issued in Brilliant Uncirculated, Proof and gold-plated Proof versions in January.

A northern party mapped the western Arctic coast and adjacent islands, and a southern party explored the geology, resources and native inhabitants of the northern mainland.

Traveling by ship and dogsled, the team braved multiple hardships, and 17 of its members died during the expedition. Their efforts led to discovery of four islands and produced 14 volumes of scientific data and thousands of specimens, artifacts and photographs.

The silver dollar weighs 23.17 grams and measures 36.07 millimeters in diameter.