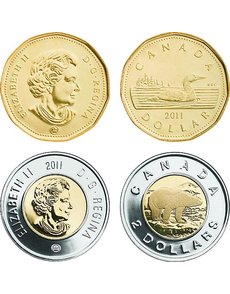 Canada’s $1 and $2 coins will soon sport technological upgrades to deter counterfeiting and new compositions, and to save the Canadian government millions annually. Examples of current composition 2011 coins appear here.

The Royal Canadian Mint has received government approval to replace the current aureate bronze dollars and ringed bimetallic $2 coins with more advanced, lighter and cheaper replacements to save millions and deter counterfeiting.

The new coins are expected to be released in 2012 after production of them begins in the last quarter of 2011.

The new multi-ply plated steel coins will be similar in look and feel to the current versions.

Planned technology to debut on the coins includes the use of a laser engraved mark or marks on the reverse of each coin. In addition, a “virtual image” and edge lettering will be used on the $2 coin.

Despite an initial $40 million cost to the vending industry, the move will save a maximum estimated $16 million a year for the Canadian government, according to RCM documents filed when the RCM sought approval.

In the request for approval, the RCM sought an amendment to the Royal Canadian Mint Act, which governs the composition, denomination and other specifications of Canadian coins, in order to make the changes.

“Canadian and foreign governments continue to struggle with rising production costs for coinage, which are mainly driven by the cost of raw materials,”

Over the last decade, the price of nickel (for many years a major component of most Canadian coins) has fluctuated wildly, and is nearly 1,000 percent above 2000 levels, costs that are expected to remain at that level “through the foreseeable future,” the RCM asserts.

The $1 coin is currently composed of bronze-plated nickel or brass-plated nickel (both alloy variations exist). New $1 coins will have a steel core coated with multi-ply plated brass.

The $2 coin will continue to have a yellow core and an outer ring that is white in color, but edge serrations would be thinner to allow for the application of edge lettering.

The new security features are pre-emptive, and not a response to any specific counterfeiting threat, according to the regulatory filing.

“Although evidence indicates that there is currently not a security problem with non-genuine one- and two-dollar Canadian circulation coins, these features will enhance the security of the new coins,” according to the RCM.

“The new features present a major deterrent to forgers trying to duplicate them as it would require a significant capital investment along with strong technical knowledge to effectively operate the process.”

The new laser-mark, virtual images and edge lettering features will allow for a visual authentication of the new $1 and $2 coins, and the cost to produce such features would result in it being prohibitive for counterfeiters to duplicate, according to the RCM.

Another deterrent to counterfeiting will be the unique EMS, or “electromagnetic signal,” of both coins.

That change is not without cost.

The RCM acknowledges that introducing the new coins will require the vending industry to spend an estimated $40 million to recalibrate their automated coin-acceptance equipment to read the new coins and still accept the old versions, but that “as part of the industry’s capital planning, such updates already occur on a somewhat regular basis.”

The cost estimate is based on $300 for recalibrating older machines and $100 for newer machines. Any new machines purchased after the new coins make their debut would already come equipped to accept the new coins.

The cost is a one-time charge, the RCM is quick to note, adding that “the vending industry represents less than one percent of total retail trade. The cost savings to the remainder of the Canadian public as well as the added qualitative environmental and security benefits outweigh the calibration costs to the vending industry, which should already be part of their routine capital planning process.”

The RCM has been working with vending industry representatives for months to keep them aware of the changes.

Their efforts include presenting sample tokens to the Canadian Automated Merchandising Association’s members.

Representatives of vending and other coin-operated industries will receive examples of the new coins six months before the coins would begin circulating for final testing and equipment calibration.

In addition to deterring counterfeiting, the unique EMS also allows the RCM to expand its metal harvesting program because equipment will allow the old coins to be sorted from the new, according to the RCM.

Millions of pounds of older, nickel-based Canadian coins have been withdrawn from circulation in the Alloy Recovery Program, which began in 2003 and generates millions of baseline revenue for the Mint.

The new $1 and $2 coins would be produced along with other circulation coins at the RCM’s Winnipeg Mint. ¦