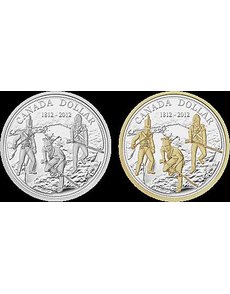 Canada’s annual silver dollar, which in 2012 marks the bicentennial of the War of 1812, is available in three versions, including Proof, at left, gold-plated Proof, right, and Brilliant Uncirculated, not shown. 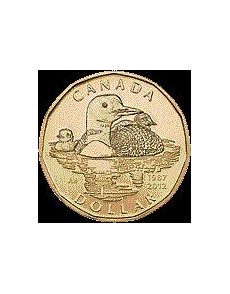 The Loon dollar celebrates its 25th anniversary in 2012, so the annual Specimen set contains a commemorative version of the coin and bears the dual dates 1987 and 2012.

The coin is available both individually and as part of two Proof sets. New for 2012 is the first release, in what is to be an annual offering, of a silver Proof set featuring every coin struck in .9999 fine silver.

The 2012 annual silver $1, struck in Brilliant Uncirculated, Proof and gold-plated Proof versions, celebrates the bicentennial of the War of 1812, when the British Empire clashed with the United States of America, drawing in Native Americans as well.

The conflict “united English, French and First Nations forces in defending the borders and values of a future Canada and also ushered [in] two centuries of peace between Canada and the United States,” according to the RCM.

The same design is used for each of three different versions.

The reverse, designed by military artist Ardell Bourgeois of British Columbia, features a British sergeant, a Voltigeur Canadien (light infantry unit) and an Iroquois warrior united in the defense of their border against an approaching invader (U.S. forces). Behind them is a map showing part of the Great Lakes and southwestern Ontario, “where U.S. forces sparked the conflict by invading the territory of the future city of Windsor, Ontario on July 12, 1812,” according to the RCM.

Encircling this design are 200 beads near the rim of the coin to symbolize the 200th anniversary of the start of the War of 1812.

The obverse features the Susanna Blunt-designed effigy of Queen Elizabeth II, which appears on all of the new coins in this release.

All of the coins measure 36.07 millimeters in diameter, the same as previous issues.

The RCM is offering two 2012 Proof sets, each with a different version of the commemorative silver dollar, and having the other coins made of different compositions.

One of the 2012 Proof sets will offer the other 40,000 standard Proof issues and will also feature Proof base metal examples of the eight circulating denominations of Canadian coins: the 1-cent, 5-cent, 10-cent, 25-cent, 50-cent, $1 and $2 coins.

The commemorative silver dollar in this set differs from previous dollars in Proof sets offered in recent years in that it does not feature any selective gold plating.

This 2012 Silver Proof set becomes available in April and carries a retail price of $99.95.

What the RCM website bills as a Fine Silver Proof set is an addition to the RCM’s line of products for 2012.

This year, for the first time, all eight denominations in the additional Silver Proof set are composed of .9999 fine silver (only some of the coins were previously struck in silver, and that was to a .925 fineness).

The annual commemorative silver dollar in the Fine Silver Proof set has gold plating on the edge, on the rims of both obverse and reverse, and on the three warrior figures depicted on the reverse. In addition, the silver cent and $1 and $2 coins feature gold plating (selective on two pieces) to mimic the look of circulating versions. What RCM officials term as “pink gold” is used for the cent, with the maple leaves on the reverse selectively plated in pink gold (generally described as an alloy of gold and copper) to emulate the appearance of a newly minted copper-based coin. According to the RCM, this is the first time a pure silver version of the 1-cent coin has been offered in a Proof version.

A standard $2 coin is a ringed bimetallic piece, so gold plating is applied to the .9999 fine silver $2 coin in the Fine Silver Proof set on what would be the core section of a standard $2 coin. The entirety of the silver Loon dollar (bearing the standard design) has been plated with gold.

A maximum of 20,000 Fine Silver Proof sets are being issued, each set offered for $224.95. The mintage limit reflects a drop from an edition of 45,000 for the similar set in 2011 (one containing the 2011 commemorative silver dollar and Proof examples of the circulating coins, some composed of .925 fine silver).

An annual Uncirculated set, featuring examples of all eight circulating denominations in Uncirculated condition, has also been released.

The annual Specimen set features eight coins: Specimen-finish examples of seven circulating coins and also a special Specimen Loon dollar available only in the annual set. The design for the 2012 Specimen dollar honors the 25th anniversary of the Loon dollar, which entered circulation in 1987.

A common loon swims on the reverse of the 2012 coin with two young chicks, one just behind the mother and another on her back (see design at top of page), in a design by Ontario artist Arnold Nogy. The dual dates of 1987 and 2012 also appear on the reverse.