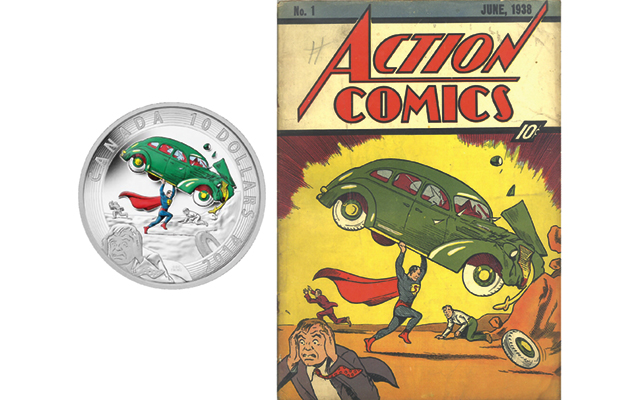 Part of the cover of Action Comics No. 1, the first appearance of Superman, appears on a 2014 Proof silver $10 coin from the Royal Canadian Mint. Secondary market values are already some 40 percent higher than issue price less than two weeks after public sales began and the coin sold out.

Images courtesy of the Royal Canadian Mint and Heritage Auctions. 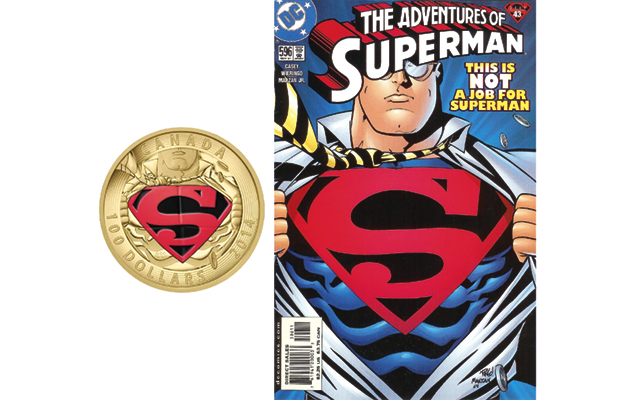 The Adventures of Superman No. 596 is the basis of the design for a 2014 Proof gold $100 coin. The coin now sells for nearly double issue price. Prices for the comic have also soared since the coin launch, according to collector Mike Kohon, who provided this comic image.

Images courtesy of the Royal Canadian Mint and Mike Kohon.

In no surprise, four new coins from Canada celebrating Superman have taken flight in the secondary market like, well, the superhero himself.

The Royal Canadian Mint did not confirm how quickly each of the four 2014 coins achieved sellout status, but all four are no longer available through the RCM, and distributors’ offerings are also limited.

Though Gatewest Coins only offers one of the coins individually, Talisman Coins continues to offer all four of the 2014 coins individually. Both dealers’ prices are higher than issue price, because of increased market interest.

One of the two big winners, so far, is the half-ounce silver $10 coin showing the cover of Action Comics No. 1,  which showcased the first appearance of Superman.

The relative affordability of this coin (it was the least expensive in the 2014 release) and its significance in showing the first appearance of Superman appear to be factors underpinning the coin's popularity.

The sellout was no surprise, either, given the market strength for the 2013 Superman gold $75 coin, which is now a $1,500 coin, settling from the peak of about $2,500 shortly after it was released; the coin had an issue price of $750 Canadian.

An example of the 2013 coin sold through eBay.com on Aug. 23 realized $1,500, and the buyer has left positive feedback for the transaction, indicating the transaction is likely to be legitimate. Another example sold Sept. 4 for a reported $2,000, but feedback has not yet been left.

Whether the September price was more affected by the release of the 2014 coins or by the No. 22 serialized certificate of authenticity accompanying the coin cannot be determined. Going forward, collectors may want to watch whether the 2014 release refreshes interest in the earlier coins.

Coins aren’t the only winners

The coins aren’t the only items whose value is being affected in the secondary market.

Comic book seller Mike Kohon, who provided Coin World an image of an issue of The Adventures of Superman No. 596 comic book, the subject of the 2014 gold coin, said that values in online auctions for that comic book have skyrocketed since sales of the 2014 coins began.

“This is interesting because comics’ values rarely shoot up for non-story related reasons,” Kohon wrote, in an email to Coin World.

“Usually if there’s a jump in value, it’s because an obscure, briefly mentioned character from long ago suddenly reappears and becomes the arch villain.”

“We now know what happens when hobbies collide,” wrote Kohon.

A similar increase in price due to the coin series is not likely to be generated for Action Comics No. 1, however, since that comic is already worth a hefty sum.