Canada’s 50-cent coins available, but only in collector rolls 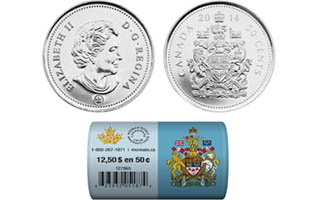 The coins are not issued for circulation anymore but are included in annual sets and offered to collectors in Uncirculated quality in rolls with specially designed wrappers.

On March 4, the Royal Canadian Mint began sales of rolls of 2014 50-cent coins. A total of 20,000 rolls are available, each roll containing 25 examples. The languages on the wrapper bear French and English inscriptions.

The Susanna Blunt effigy of Queen Elizabeth II appears on the obverse, with Canada’s coat-of-arms on the reverse.

The arms represent Canada, and its political roots, especially its ties to Great Britain and France.

The coat-of-arms was proclaimed by King George V in 1921 and began appearing on Canada’s coins in 1937. The coat-of-arms has been modified and updated multiple times in the intervening years, and now shows Saint Edward’s crown, the Order of Canada and the Canadian motto.

Sales through the RCM are limited to three rolls.

Orders from the RCM will include shipping and handling, and be charged based on the current exchange rate.

Gatewest Coin Ltd. and Talisman Coins also carry the coin as distributors for the RCM.

Visit Talisman’s website at www.talismancoins.com or telephone the firm at 888-552-2646.