Canada ushers in spring with colorful bouquet of commems 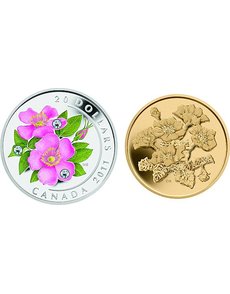 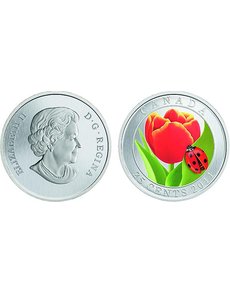 A new nickel-plated steel 25-cent coin celebrates the connection between the Netherlands and Canada represented by a colorful tulip, which is adorned with a ladybug. The coin is larger in diameter than Canada’s standard 25-cent coin. 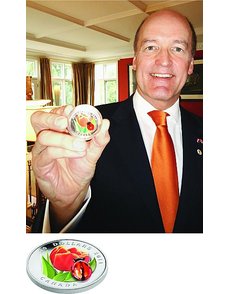 Kingdom of the Netherlands Ambassador to Canada Wim Geerts displays the Proof Tulip and Ladybug .9999 fine silver $20 coin, unveiled April 26 during a ceremony at his residence in Ottawa. The coin features a three-dimensional Venetian glass ladybug, shown in a side view.

Three of the four new coins offer a colorful scene, with the flowers vibrant in a blaze of glory. A colorful Tulip and Ladybug design is available both on a Specimen nickel-plated steel 25-cent coin and a Proof silver $20 coin. Another $20 coin depicts the wild rose, also featuring color.

The coins are among a total issue of 20 coins, the remainder of which Coin World will report on in future issues.

Two of the coins celebrate the emotional and natural connection between Canada and the Netherlands.

Post World War II, the Netherlands presented more than 100,000 tulip bulbs to Canada in thanks for Canadian forces’ efforts to liberate the Dutch during the war.

Canada also provided refuge for the Netherlands’ Crown Princess Juliana and her daughters during the war.

Ottawa is now the site of an annual spring festival that is the world’s largest tulip festival, according to the RCM.

A tulip in full bloom appears, with a ladybug crawling on one leaf, on the reverse of both coins. The design is credited to unnamed RCM engravers.

The obverse carries the standard Susanna Blunt effigy of Queen Elizabeth II, as on all current Canadian coins.

The nickel-plated steel 25-cent coin has no stated mintage limit; it is scheduled to be “produced to demand.”

The Proof .9999 fine silver $20 version sports an additional accoutrement: the ladybug is fashioned from Venetian glass created by artist Giuliano Donnagio and rises above the coin’s surface as a three-dimensional element.

The Tulip and Ladybug $20 coin weighs 31.39 grams, measures 38 millimeters in diameter and has a mintage limit of 5,000 pieces.

Another Proof .9999 fine silver $20 coin celebrates the wild rose in full color bejeweled with three Swarovski crystals. The design is by Margaret Best.

From the Maritime Provinces in the east, to the lower mountain valleys of the Rocky Mountains west of the prairies, and north to Nunavut, the wild rose (Rosa acicularis) punctuates the Canadian landscape with pink.

The fourth floral coin in the May 2 launch is the final of 12 annual coins celebrating provincial and territorial flowers.