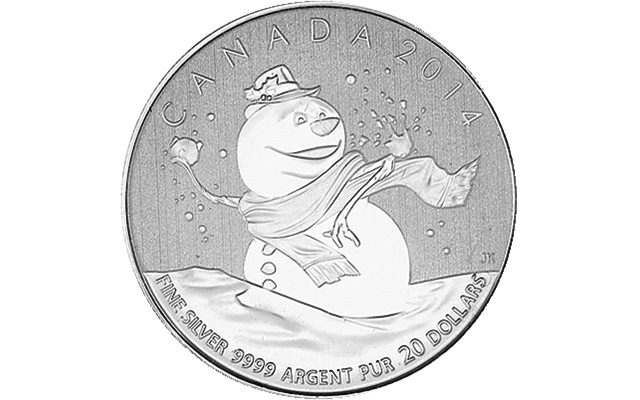 Gift-givers who want to share silver with their family and friends could consider the RCM’s 2014 Snowman $20-for-$20 coin. The silly snowman delivers slightly more than a quarter-ounce of silver at an affordable price.

The newest coin in the Royal Canadian Mint’s series of silver $20 coins sold at face value is the 2014 Snowman coin.

The coin offers slightly more than a quarter-ounce of silver and a whimsical reverse design created by designer Jesse Koreck to accompany the Susanna Blunt effigy of Queen Elizabeth II on the obverse.

The snowman, adorned with a holly-banded hat, delivers a snowball in a winter scene no doubt common in the climes of Canada. Snowball fights are a joyous component of a “snow day” off school or work, and the scene captures the excitement in miniature detail.

The coin has a mintage limit of 200,000 pieces, which is lower than most of the earlier issues. The RCM reports that all other coins have sold out, and this example has also just sold out.

The coin may no longer be ordered directly from the RCM, but two distributors serving the United States still offer the coin.

To order, visit either firm's website through the links above.