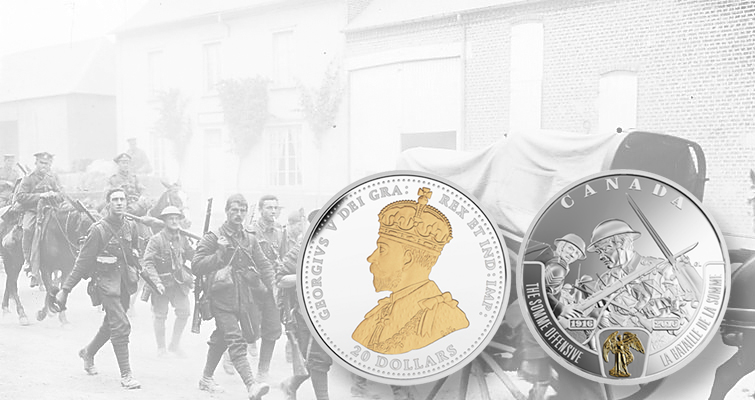 Canada’s third coin in the First World War Battlefront series showcases the sacrifice and service of Canadian forces during the 1916 Battle of Somme, among the costliest battles of World War I in terms of lives lost.

From July 1 to Nov. 18, 1916, the Somme River valley in northern France became the site of one of history’s costliest battles.

Amid the fierce trench warfare that brought staggering casualties, the soldiers of the Canadian Corps distinguished themselves with unforgettable valor, tenacity and tremendous sacrifice during the Somme Offensive.

The Royal Canadian Mint memorializes the sacrifice of Canadian soldiers with a 2016 Proof .9999 fine silver $20 coin.

Canadian artist Glen Loates designed the reverse, recreating a soldier’s viewpoint in battle during the Somme Offensive of 1916.

With bayonets fixed on their rifles, a Canadian battalion braves a constant barrage of artillery fire after going “over the top” of the trenches, as the soldiers valiantly charge across the chalky terrain towards enemy lines.

To the left, a sergeant, turned to face the viewer, shouts encouragement and urges his men forward — including the viewer, who is pulled into the scene to gain a sense of the overwhelming uncertainty and danger that hung over these courageous soldiers who valiantly pressed on. Above, a ghostly image of a young Canadian soldier looks down upon the scene and serves as a moving reminder of the heavy casualties suffered in the Somme Offensive.

At bottom center, selective gold plating showcases an inset of the winged figure of Victory as it appeared on the Victory Medal that was awarded to the allied soldiers of World War I.

Adding to the historical appeal of the coin, the obverse highlights the monarch reigning during World War I, with a gold-plated effigy of King George V by Sir E.B. MacKennal.

This is the third coin in the Royal Canadian Mint’s First World War Battlefront series, which commemorates Canada’s role in key battles of the First World War and depicts its soldiers in action on the battlefields of Europe. 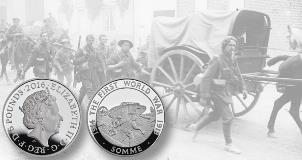