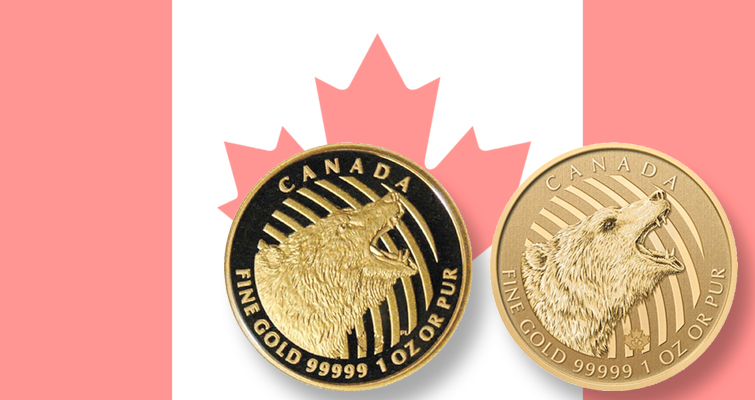 The Royal Canadian Mint issued two different varieties of the Proof 2016 Roaring Grizzly .99999 fine gold $200 coin. The normal Proof coin, not shown here, has no security mark below the bear's throat. The error variety, however, at left, features remnants of a maple leaf security feature that is supposed to be found only on the RCM's Roaring Grizzly bullion coin, represented at right. The mark is centered above the space before 1 OZ OR PUR.

Talisman Coin staff numismatists discovered Proof coins struck with two different reverse dies, including one bearing part of a lasermark Maple Leaf security feature that was intended only for the bullion version.

The lasermark is composed of an outer maple leaf containing another, smaller maple leaf. The year date 16 inside the smaller leaf identifies the year of issue.

A correct Proof coin (as the RCM intends to issue them) does not include the lasermark, which is found on RCM bullion coins. The error version, however, shows the outer outline of the laser mark.

The error version is obvious, according to distributor Talisman’s John Winkelmann.

The error die is a hybrid of the Proof and bullion versions of the coin. It has the same Proof finish as the correct Proof reverse and the designer’s initials PL (for Pierre Leduc) that normally appear on the regular Proof version but are not intended for the bullion coin. The combination of the maple leaf security mark and the PL initials suggests that it wasn’t merely the case of a wrong die being used to strike the errors.

Instead, Winkelmann suggests, the error likely occurred during the digital die production.

“One guess we can offer is that somehow, during the computer-aided design stage, in anticipation of die preparation, one layer present on the bullion coin image (the outline of the outermost maple leaf) was either transferred inadvertently or not erased from one of the proof die files,” he said in a statement. “And dies were then hubbed or generated from at least two different files for the Proof die.”

The RCM employs ArtCam’s CADCAM software to generate designs and tooling for the abundance of new issues it releases monthly.

Both versions clearly show mirrorlike fields and the contrasting frosted cameo devices and legends of a Proof issue, he said, and images Talisman provided confirm that.

The Proof finish is indisputably distinct when compared with the bullion coin finish (which is a version of the RCM’s lined Specimen finish), according to Winkelmann.

Talisman purchased a significant quantity of the Proof coin’s 250-piece mintage, and there was an almost equal distribution of both versions of the coins, he said. Whether that distribution pattern is in effect for all 250 coins, however, is unknown.

How was this not noticed at the Mint?

“That’s a good question — the error is visible to the naked eye, and there were only 250 coins (the maximum under the mintage limit) issued. Furthermore, the Royal Canadian Mint commemorative coins are triple-inspected before being passed. And yet these passed, were issued and escaped the Mint.”

This raises the question of “why two different dies were prepared for a press run of 250 total gold coins,” Winkelmann said. “Granted, some would indubitably be rejected, but even a total press run of 500 shouldn’t necessitate more than one single die pair, should it?”

This is the third minting error discovered by Talisman since 2011, when the firm discovered that the Perth Mint issued the Love Forever silver 50-cent coin for Tuvalu using a Cook Islands obverse die.

In 2014, the RCM issued a small number of Proof Portraits of Power, Bald Eagle silver $20 coins without edge lettering, which Talisman also discovered.