Canada honors 'The Great One' on commemoratives 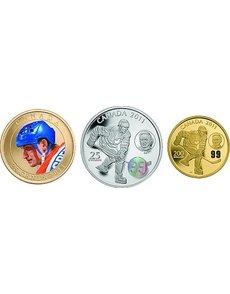 Hockey legend Wayne Gretzky is the subject of three new coins from Canada geared toward collectors. The release features a colorized 25-cent coin, a Proof silver $25 coin and a Proof gold $200 coin, left to right.

A famous athlete-turned-coin collector will have a chance to add very personal items to his collection: Hockey Hall of Fame player Wayne Gretzky, nicknamed “The Great One,” is the subject of three new noncirculating legal tender coins from Canada.

The RCM announced the coins Oct. 4. The coins will become available Oct. 11.

Gretzky made numismatic headlines in 1990 for his purchase of a set of 1873 Trade silver dollars at auction. Whether he retains those coins is unclear, as is the scope of his collection; nevertheless, three coins will now honor Gretzky in 2011, the year he turned 50 years old.

An oversized and colorized 25-cent coin joins a Proof silver $25 coin and a Proof gold $5 coin commemorating the famous Canadian; the latter two coins also honor his father Walter, a semi-professional player whose contributions to the younger Gretzky’s career famously include building an ice rink in the family backyard so a then-6-year-old Wayne Gretzky could practice the sport he still loves.

A gold-plated, copper-plated steel coin depicts the younger Gretzky “in the blue and orange colours of the team he led to four Stanley Cup victories in only five years,” an oblique reference to the Edmonton Oilers, Gretzky’s first team in the National Hockey League.

A close-up image of Gretzky dominates the reverse design, created by sports artist Glen Green, whose work includes a watercolor of Gretzky called A Portrait of Greatness that offers similar imagery of Gretzky.

The RCM’s tribute to the father-son duo of Wayne and Walter Gretzky is evident on the two Proof coins, which each carry a cameo of the elder Gretzky on the reverse design, also by Green. The Proof .9999 fine silver $25 coin also features a hologram bearing Wayne Gretzky’s famous “99” jersey number.

An unspecified portion of the sales of each coin will be donated to the Wayne Gretzky Foundation, whose mission is to provide less fortunate youth with the opportunity to experience the sport of hockey.