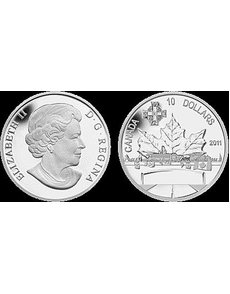 A new commemorative coin recalls the sacrifice made by 158 Canadian soldiers who died in Afghanistan, as represented by the Highway of Heroes that takes them between Trenton and Toronto in Ontario during one of their last journeys. Crowds line the route to remember the fallen, as seen on the reverse of the coin. 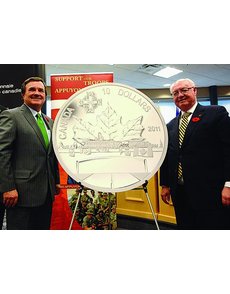 A new commemorative coin from Canada, more than a mere collector issue, honors fallen soldiers who have made the ultimate sacrifice in Afghanistan.

The Proof Highway of Heroes .9999 fine silver $10 coin commemorates the 172-kilometer (107-mile) route on Highway 401 traveled by convoys taking fallen soldiers from the Canadian Forces Base in Trenton, Ontario, to the Centre for Forensic Sciences in Toronto, in preparation for their final resting place.

Today officially known as the Highway of Heroes, the designation for this stretch of highway was borne of a spontaneous and unprecedented grassroots movement inspired by the thousands of Canadians who, since 2002, have gathered of their own volition along the roadways and overpasses of this route to pay tribute to those who have given their lives for Canada.

It is a journey that 158 members of the Canadian Forces have taken since Canadian support of U.S. operations in Afghanistan began in 2002, according to the Canadian Broadcasting Corp.

Designed by Royal Canadian Mint engraver Stan Witten in collaboration with Maj. Carl Gauthier, the coin features the Cranberry Road bridge overpass in Port Hope, Ontario, along the Highway of Heroes, as viewed from the perspective of a mourning family accompanying a lost loved one along the route.

During the solemn ceremony, the Memorial Cross, designed by the RCM following World War I under order of King George V, and which is presented to the loved ones of fallen soldiers, is carried by saluting soldiers, a symbol of the sacrifice of their fallen comrades-in-arms. It appears above the scene on the coin.

The RCM in unveiling the coin Oct. 31 announced that $20 from the $69.95 price for each coin is designated to be shared between the Afghanistan Repatriation Memorial and the Military Families Fund.

“With this special coin, the Government of Canada is paying homage to every day Canadians who have shown their unwavering support to the families who have accompanied our fallen soldiers as they made the journey along the Highway of Heroes,” said Jim Flaherty, minister of finance and minister responsible for the RCM, in a statement.

The coin was released after a spirited and vocal (and relentless) local campaign that included an online petition and newspaper articles. The coin was the brainchild of photojournalist Pete Fisher, who helped coin the highway name and who has documented the commemorations along the highway, work that was turned into a book published in October.

The price is listed in Canadian funds.