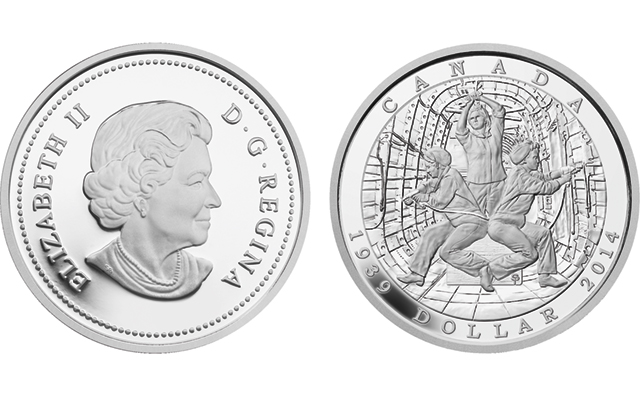 The silver dollar celebrates the 75th anniversary of the declaration of war, which came Sept. 10, 1939, with the signature of King George VI.

The reverse of the 2014 75th Anniversary of the Declaration of the Second World War coin was designed by Canadian artist Silvia Pecota. It presents a collage symbolically portraying three female workers completing construction of an Avro 683 Lancaster X heavy bomber.

In the center of the image, a standing woman in bandana and work wear of the World War II era lifts a wrench toward the ceiling of the fuselage. Flanking her on her left and right are two similarly attired women. These women are seated on a box in front of the standing woman, riveting each of the fuselage walls.

Canada began producing the Avro 683 Lancaster X during the war, with the first Canadian-built Lancaster completed Aug. 1, 1943. At the time, it was the largest aircraft ever manufactured in Canada. The Canadian version was designated the Mark X. A total of 430 Lancasters were built in Canada during the course of the war. As in America, many women in Canada stepped in to fill industrial and other roles with so many men away at war.