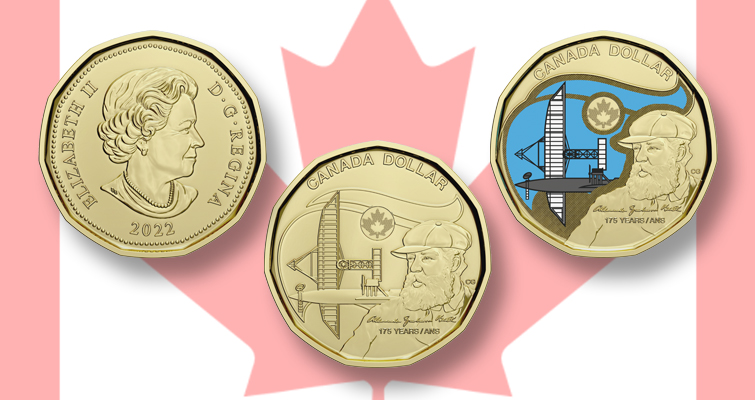 Alexander Graham Bell may be most famous for inventing the telephone, but Canada hopes to shine some light on his other works with a new commemorative circulation dollar.

The coin is being launched to mark the 175th anniversary of his birth. Plain and colorful versions have been released.

In a statement, Marie Lemay, president and CEO of the Royal Canadian Mint, said, “The Mint is celebrating the spirit of Canadian know-how and innovation behind wondrous home-grown creations such as Canada’s first-ever powered aircraft and a hydrofoil that was the world’s fastest marine craft of its time.”

It depicts Bell and two of the inventions he designed: the HD-4 Hydrofoil and the Silver Dart. It also includes an engraving of Bell’s signature, as well as the inscription 175 YEARS/ANS to mark the anniversary of his birth.

The observe features the effigy of Queen Elizabeth II, designed by Susanna Blunt in 2003.

Born in Edinburgh, Scotland, in 1847, Bell settled with his family in Brantford, Ontario, where he developed a passion for problem-solving and science from his early years. It was there that he built a workshop to conduct sound experiments, where the idea for an “electric telephone” first took shape.

In 1871, he accepted a teaching position in Boston, dividing his time between his new home and the family homestead in Brantford.

“My great-grandfather had a genuine and rare intellectual curiosity that kept him striving, researching and creating,” said Alexander Graham Bell descendant Sara Grosvenor. “As my father told me, he could no more stop inventing than stop breathing. His legacy is still relevant through his many inventions, many of which we take for granted. From the telephone, to the photophone, to aviation research, to medical devices like the respirator, the iron lung, the metal detector and the audiometer. All these impacted people’s lives and I think that’s what a legacy is — how someone impacts other people’s lives in a positive way.”

After inventing the telephone in 1876, he built Beinn Breagh, an estate near Baddeck on Cape Breton Island, Nova Scotia.

It is there that he designed more inventions, such as the Silver Dart, Canada’s first manned aircraft, and futuristic hydrofoil marine craft that blazed the waters of Bras D’Or Lake.

He spent much of his later life working at Beinn Breagh, until his death in 1922. Baddeck is now home to the Alexander Graham Bell National Historic Site, where artifacts and full-scale replicas of his transformative inventions are on display.

The circulation coin is limited to a mintage of three million coins, of which two million feature a color enhancement.

The colored and plain circulation coin can be purchased together as part of a seven-piece Collector Keepsake coin set. They are packaged in an illustrated collector card that contains one of each currently circulating coin, from the 5-cent coin to the $2 piece.

The RCM has also issued specially wrapped rolls of the plain and color coin, and a 1-ounce, .999 fine gold $200 coin using the circulation design.

These join many products issued earlier in 2022, and all of these may be ordered from a special page at the RCM’s website, www.mint.ca/bell. 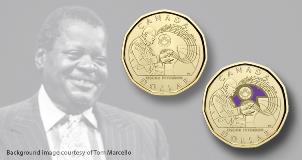 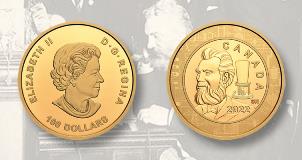