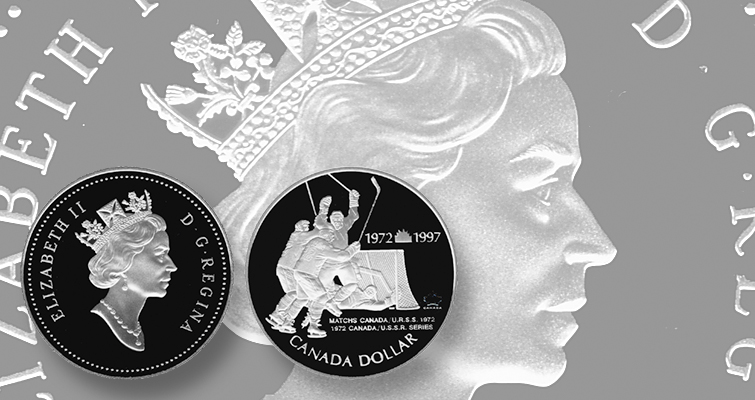 Long before the United States of America toppled a Russian hockey team, Canada faced the Soviets and won. Canada’s silver dollar from 1997 marks the 25th anniversary of this famous moment in Canadian sporting history.

Coin World continues a feature by Senior Editor Jeff Starck about Canadian coins celebrating hockey. This is the fourth part of the story, which first appeared in the November Coin World issue.

Of course hockey happens beyond the professional level.

One of the greatest matches in United States history was the 1980 U.S. Olympic team’s defeat of the Soviet team, but Canada has its own Cold War-era success story against the Soviets, eight years before America’s “Miracle on Ice.”

In 1972, Canada had withdrawn from the International Ice Hockey Federation in a dispute over using professional players, as Canada’s former top position in ice hockey was threatened by the Soviet Union.

The Summit Series was an eight-game ice hockey series between the USSR and Canada, held in September 1972. It was the first competition between the Soviet national team and a Canadian team of professional players from the NHL, known as Team Canada.

Much like the American contest in 1980, the Summit Series was viewed as a battle for both hockey and cultural supremacy.

Paul Henderson scored the game-winning goal in the series’ sixth, seventh and eighth games, making him a national hero: the final goal was voted the “sports moment of the century” by The Canadian Press and earned him numerous accolades.

In 1997, to mark the 25th anniversary of the victory, Canada issued its annual silver dollar, in both Proof and Brilliant Uncirculated versions, with a reverse depicting Henderson after his series-winning shot, arms aloft, in a scene that any Canadian hockey fan would recognize.

Amateur hockey also has a place on coins, including a coin celebrating the longest-running international hockey series. In 2006, Canada’s annual Proof gold $100 coin, minted from .5833 fine gold, celebrates the 75th game in that series. The long-running contest is between the Royal Military College of Canada and the United States Military Academy at West Point.

The first game was established in 1923 to foster goodwill between the two national military schools, according to the RCM.

The reverse of the 2006 coin features the Royal Military College building in the background behind several skaters. 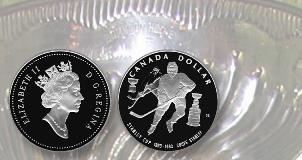