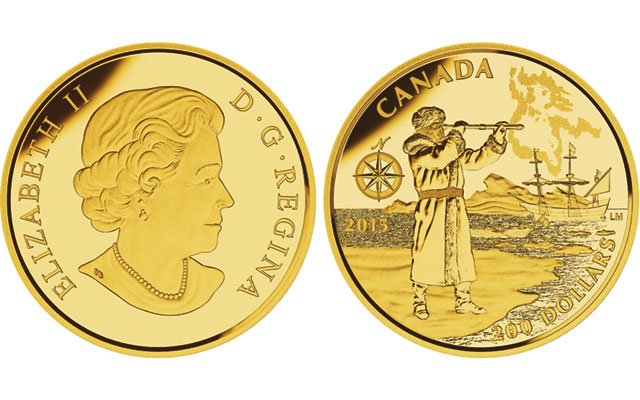 Famous for his exploration of Hudson Bay and for his mysterious disappearance following the mutiny of his crew, Henry Hudson ranks among the most esteemed and intriguing European explorers of the land now known as Canada.

Hudson is the subject of the fourth release in the Royal Canadian Mint’s popular Great Canadian Explorers series.

The image centers on a full-length portrait of Hudson, viewed from the right and shown gazing to the right side of the coin through a spyglass. Hudson, on shore, wears a heavy coat trimmed in fur, a fur hat, and long leather boots. At right, in the sky portion of the image, is a stylized, cloud-like map of Hudson Bay, and Hudson’s spyglass points directly into the centre of the bay.

Below the map, Hudson’s ship, Discovery, rests at anchor in the Bay. A party of crewmen row toward land in a small rowboat. On the left side of the image is an Elizabethan-era directional wind rose.

The coin weighs 15.43 grams and measures 29 millimeters in diameter.

The coin’s mintage is limited 2,000 pieces, with a retail price of $1,199.95 Canadian. For purchases from the RCM, the U.S. price is determined based on the exchange rate at the time of purchase.