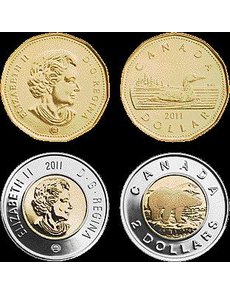 Canada’s new lighter weight $1 and $2 coins are due to enter circulation in early 2012, after receiving final governmental approval before Christmas.

The notice of approval was published Jan. 4 in the Canada Gazette.

The new multi-ply plated steel coins will be similar in appearance and feel to the current versions.

Though largely driven by the potential to save millions annually, the changes are coming hand-in-hand with the development of new anti-counterfeiting technology by the RCM.

Planned anti-counterfeiting technology to make its debut on the coins includes the use of a lasermark maple leaf on the reverse of each $1 coin and two “virtual image” maple leafs “between two lines at the top of the coin and the words CANADA and 2 DOLLARS interspersed with two lasermark maple leaves each within a circle at the bottom of the coin.” In addition, edge lettering of CANADA and 2 DOLLARS, with a maple leaf flanking each side of CANADA, will be used on the $2 coin.

RCM Senior Manager of Communications Alex Reeves declined to answer questions about the timing of the coins’ release, the RCM’s cooperation with Canadian vending officials and how the new coins affect the RCM’s relationship with blank provider Jarden Zinc in Greeneville, Tenn., which expanded its facility in 2011 to service global plated coinage demand. The firm has produced blanks for Canada’s dollar coins since 2005 and will be retained as a secondary source of supply for the multi-ply plated dollar blanks.

Despite an initial $40 million cost to the vending industry for retrofitting equipment, the move will save a maximum estimated $16 million a year for the Canadian government, according to RCM documents filed as the RCM sought approval, for a present value of $107.5 million over 10 years.

That estimate of savings is based on a projected demand of 30 million coins of each denomination for each of the next 10 years, with some of the production needed to replace coins that are withdrawn from circulation and melted through the metal harvesting program. The RCM reported in the 2010 annual report that using a multi-ply plated steel blank for the $1 coins would save 30 cents per coin.

In the request for approval, the RCM sought and received an amendment to the Royal Canadian Mint Act, which governs the denomination, composition and other specifications of Canadian coins, in order to make the changes.

The dollar coin is currently composed of bronze-plated nickel or brass-plated nickel (both alloy variations exist). New dollar coins will have a steel core coated with multi-ply plated brass.

The current $2 coin has an aluminum-bronze center piece and nickel outer ring. For the new $2 coin, the center piece will be composed of aluminium-bronze coated with multi-ply plated brass; the outer ring will be steel plated with nickel.

The dollar coin will remain “yellow in color,” according to the RCM, and the shape will remain 11-sided.

The $2 coin will continue to have a yellow core and an outer ring that is white in color, but edge serrations will be thinner to allow for the application of edge lettering.

The RCM is using the introduction of new money-saving alloys as also an opportunity to bolster the $1 and $2 coins against the ever-growing threat of counterfeiting. The new security features are pre-emptive, and not a response to any specific counterfeiting threat, according to the regulatory filing.

“The new features present a major deterrent to forgers trying to duplicate them as it would require a significant capital investment along with strong technical knowledge to effectively operate the process,” according to the RCM.

The new lasermark, virtual images and edge lettering features will allow for a visual authentication of the new $1 and $2 coins, and the cost to produce such features would result in it being prohibitive for counterfeiters to duplicate, according to the RCM.

Another deterrent to counterfeiting will be the unique EMS, “electromagnetic signal,” of both coins. That change is not without cost to operators of coin acceptance machines.

The RCM acknowledges that introducing the new coins will require the vending industry to spend an estimated $40 million Canadian to recalibrate automated coin-acceptance equipment to read the new coins and still accept the old versions, but that “as part of the industry’s capital planning, such updates already occur on a somewhat regular basis.”

The cost estimate is based on $300 for recalibrating each older machine and $100 for each newer machine. Any new machines purchased after the new coins are introduced would already be equipped to accept the new coins.

The RCM has been working with vending industry representatives since 2009 to keep them aware of the changes. RCM efforts include presenting sample tokens to the Canadian Automated Merchandising Association’s members on multiple occasions, including sending out samples of the new coins in April 2011.

In addition to deterring counterfeiting, the unique EMS also enables equipment to sort the old coins from the new, allowing the RCM to expand its metal harvesting program, according to the RCM. Millions of pounds of older, nickel-based Canadian coins have been withdrawn from circulation in the Alloy Recovery Program, which began in 2003 and generates millions of baseline revenue for the Mint.

More than 1 billion dollar coins and more than 700 million $2 coins are in circulation, according to the RCM, offering a huge supply of metal to be melted.

The new $1 and $2 coins will be produced along with other circulation coins at the RCM’s Winnipeg Mint, and their lighter weight means savings in transportation costs. ¦