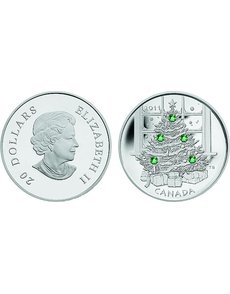 Peridot crystals highlight a Christmas tree in a scene on the Proof 2011 Christmas Tree .9999 fine silver $20 coin in the RCM’s holiday coin series. 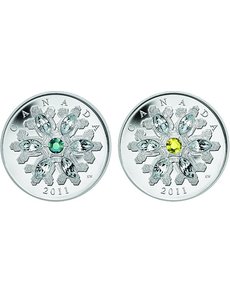 Swarovski crystals glisten on new Proof silver $20 coins from Canada as part of the annual Crystal Snowflakes series. The standard 2011 coins feature emerald or topaz crystals at the center. 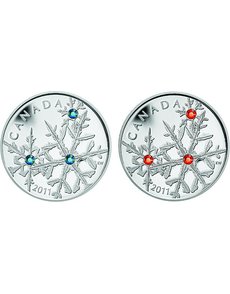 The calendar may indicate that it is fall, but “snowflakes” are already piling up at the Royal Canadian Mint.

Four of five winter-themed Proof .9999 fine silver $20 coins released Sept. 1 feature crystal snowflakes in their designs. The only piece not depicting snowflakes depicts a Christmas tree, and it too bears crystals.

With the Sept. 1 release of the four Crystal Snowflake coins, the RCM both continues and expands upon a series that began in 2006. Differing numbers of Swarovski crystals are embedded on each coin at various points on a snowflake or snowflakes in the series. The coin designs change annually.

The inaugural coin in the series was a Proof gold $300 coin. The series was expanded in 2007 with the addition of a Proof silver $20 coin, each featuring a single snowflake with multiple crystals. The RCM in 2011 debuts a new series, offering a Small Crystal Snowflake coin bearing a design with multiple, smaller snowflakes.

The standard 2011 Crystal Snowflake $20 coins are available in two versions bearing the same snowflake design, one with an emerald crystal and the other with a topaz crystal. Each standard 2011 coin bears seven crystals: either the topaz or emerald at the center, and six clear crystals arrayed about on the six branches of the design’s snowflake.

The 2011 Small Crystal Snowflake $20 coin bears a design with multiple, smaller snowflakes, each coin sporting either three colorful Montana crystals or Hyacinth crystals in (the former blue in color and the latter an orange-red color).

Konrad Wachelko designed the reverses of both designs of the 2011 Crystal Snowflake $20 coins, as he has done for the previous Crystal Snowflake coins. All the 2010 and earlier issues have sold out, according to the RCM.

Also offered this year is a silver $20 coin from the holiday program, the 2011 issue celebrating the Christmas tree. It is the fourth design in a holiday program of Proof silver $20 coins that began in 2007. Previous issues in the series have shown a sleigh ride scene, pine cones and more (no coin was issued for this series in 2009).

The Christmas Tree $20 coin, designed by Tony Bianco, shows a decorated tree against a frosted and snow-covered windowpane backdrop, five peridot crystals arranged on the tree. Gifts are piled on the floor, below the tree branches, awaiting the joyous ceremony when gifts will be exchanged.

All of the Proof .9999 fine silver $20 coins weigh 31.39 grams, measure 38 millimeters in diameter and have a mintage limit of 15,000 pieces. Each coin is encapsulated and presented in a maroon clamshell case lined with flock and protected by a black sleeve.

The Susanna Blunt effigy of Queen Elizabeth II appears on the obverse of all of the Canadian coins.