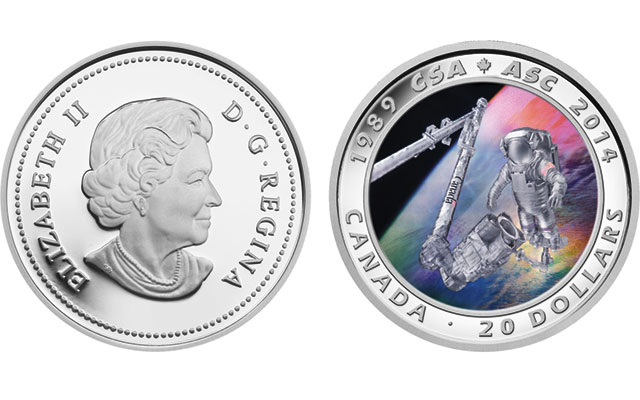 A new commemorative coin from Canada celebrates the celestial achievements of the Canadian Space Agency. The Proof silver $20 coin was unveiled Sept. 30 in Toronto. 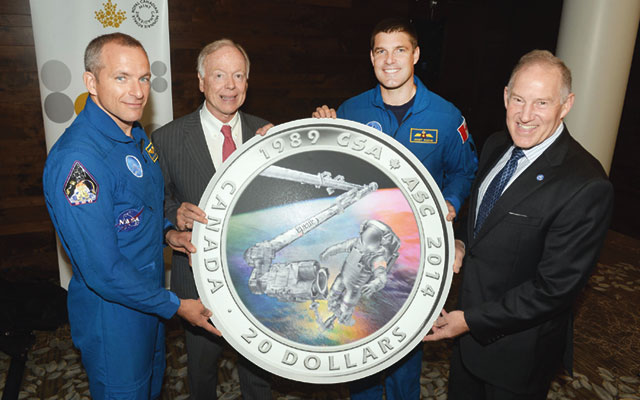 The Royal Canadian Mint has unveiled a Proof .9999 silver $20 coin with an achromatic hologram to honor the 25th anniversary of the Canadian Space Agency.

This is the second achromatic hologram coin produced by the RCM (the first was part of the 2013 Superman program). This new style of hologram creates a three-dimensional illusion for the viewer, giving depth and movement to the scene, according to the RCM.

The coin was unveiled Sept. 30 at the International Astronautical Congress 2014 held at the Metro Toronto Convention Centre, but will not be released until Oct. 7. The ship date is currently listed at the RCM website as Nov. 12.

The CSA is the organization “committed to leading the development and application of space knowledge for the benefit of Canadians and humanity,” according to the RCM.

The reverse of the coin shows the achromatic holographic image of a Canadian astronaut floating high above the Earth. The unidentified astronaut is anchored to a foot restraint on Canadarm2, one of the CSA’s landmark technological developments installed on the International Space Station.

The purchase price when ordering direct from the RCM will be set in U.S. funds based on the exchange rate at the time of purchase.

Gatewest Coin Ltd. and Talisman Coins, official distributors for the RCM, carry the coin at a fixed price in U.S. dollars. Both firms offer the coin for $104.95 in U.S. funds.