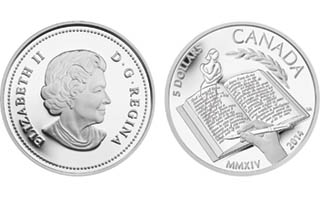 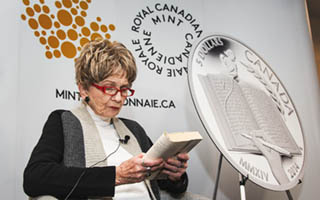 Author Alice Munro recites a passage from The View from Castle Rock at the Royal Canadian Mint’s March 24, 2014, launch of a silver $5 collector coin.

Award-winning short story author Alice Munro has had her work printed in paper before, but never struck in metal – until now.

Canada’s newest 2014 collector coin celebrates the recipient of the 2013 Nobel Prize for Literature, and even shows a passage from her short story collection The View from Castle Rock  engraved on the coin's reverse.

The Proof 2014 .9999 fine silver $5 coin was unveiled March 24 at the Greater Victoria Public Library in British Columbia. Laurie McGaw’s reverse design shows an open book and a passage selected by Munro herself, with an ethereal female form drifting out of the end of the author’s pen representing one of the many central characters from Munro’s short stories.

The passage reads: “And in one of these houses – I can’t remember whose – a magic doorstop, a big mother-of-pearl seashell that I recognized as a messenger from near and far, because I could hold it to my ear – when nobody was there to stop me – and discover the tremendous pounding of my own blood, and of the sea.”

Munro explained the selection of text, according to the Royal Canadian Mint, noting that “as an author you need to be alone. You need to get to a place of solitude and when you get there it can be magical. The whole world opens up to you in your imagination merging the world inside of you and outside of you.”

Above the book, a laurel branch celebrates Munro’s distinction as the first Canadian woman to win a Nobel Prize in Literature.

Toward the bottom of the field, the coin's date is inscribed in Roman numerals (MMXIV).

As part of the coin release, the RCM announced a $10,000 donation to the Writers’ Trust of Canada to honor Munro’s achievement.

In 1986, Munro was the first recipient of an annual Writers' Trust award in recognition of a Canadian writer's exceptional body of work.

During her career she has earned three of Canada’s Governor General Awards for fiction and the 2009 Man Booker International Prize for her lifetime body of work.

It costs $69.95 and can be ordered directly from the RCM beginning April 1.

Gatewest Coin Ltd. and Talisman Coins also carry the coin as distributors for the RCM.

Visit Talisman’s website at www.talismancoins.com or telephone the firm at 888-552-2646.