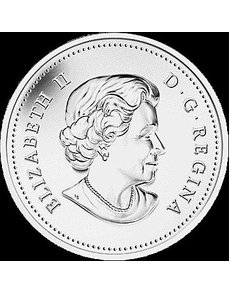 All four examples of the new 25-cent coins carry the Susanna Blunt effigy of Queen Elizabeth II on the obverse. 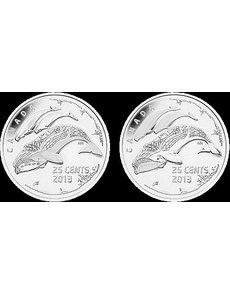 The other theme for a new 25-cent Canadian coin carries a design from Tim Pitsiulak, a native Inuit artist, with bowhead and beluga whales and native symbols. Two versions were released of this design as well. 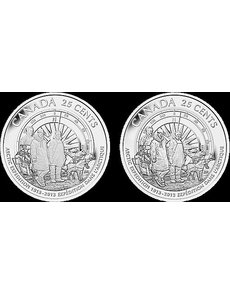 The celebration of a landmark Canadian scientific expedition continues with circulating coins.

The Royal Canadian Mint on Nov. 22 launched two new 25-cent coins, each available in two versions, to mark the centennial of the 1913 to 1916 Canadian Arctic Expedition and life in northern Canada.

The design shows three explorers and a dogsled team in the foreground, preparing “to take their first north-bound steps into uncharted territory,” according to the RCM. An antique compass fills the background. Ross’s BR initials, the inscriptions ARCTIC EXPEDITION 1913-2013 EXPÉDITION DANS L’ARCTIQUE and the denomination complete the design.

The other 25-cent coin features a design from native Inuit artist Tim Pitsiulak of Kinngait (Cape Dorset), Nunavut. His “Life in the North” features a central design of two beluga whales and a stylized bowhead whale, with the artist’s syllabic initials in Inuktitut below the image. Arcing around the rim of the coin, in silhouette, is a scene of kayaks and a traditional Inuit whaling boat in pursuit of a breaching bowhead whale.

The central image of the bowhead whale displays a large Dorset Culture ivory mask on its dorsal side, which, along with smaller depictions on its lower jaw, represents the Tuniit (paleo-Eskimos) who migrated from Siberia across the Bering Straight into North America. An amauti design on the tail represents hooded clothing worn by Inuit women, while an igloo pattern adorns its midsection, and the Thule ivory comb on its head symbolizes Inuit expansion across Canada, according to the RCM.

The inscriptions CANADA and 25 CENTS and date 2013 also appear on the reverses of both coins.

The coins were unveiled in ceremonies in both Victoria, British Columbia, and in Cambridge Bay, Nunavut.

The 1913 to 1916 scientific expedition was jointly organized by the Geological Survey of Canada and the Naval Service, bringing together experts in anthropology, biology and the earth sciences.

A northern party mapped the western Arctic coast and adjacent islands, and a southern party explored the geology, resources and native inhabitants of the northern mainland.

Traveling by ship and dogsled, the team braved multiple hardships. Seventeen of its members died during the expedition.

Twenty-five million of the 25-cent commemorative circulating coins are being issued through the RCM’s national coin distribution network, with the mintage evenly split between the two designs (12.5 million coins each).

Each design will be available in two combinations of frosted accents, in mintages of 6.25 million coins for each frosting version.

The Royal Canadian Mint’s Senior Manager of Communications, Alex Reeves, said that special frosting was chosen for the coins because the designs didn’t lend themselves to coloring, a technique the RCM has employed for other recent commemorative 25-cent coins.

On the other version of the Arctic coin, the men on the coin are frosted, making them the focal point.

Frosting on one of the Life in the North coins appears on both beluga whales and the bottom part of the Bowhead whale’s jaw. This makes the two beluga whales the focal point, and give the frosted elements a whitish-gray look.

On the other Life in the North coin, the bowhead whale’s body is selectively frosted, making the larger whale the focal point of this coin.

The RCM offered Canadian residents the opportunity to buy a limited number of the coins at face value, in 12-coin packs (six of each design) priced at $3 per pack, with free shipping, when ordered at www.mint.ca/arctic.

A Matte Proof .9999 fine silver $3 coin bearing Pitsiulak’s Life in the North design (without the inscriptions of the 25-cent coin version) is also available. With a mintage limit of 10,000 pieces, the 7.96-gram coin retails for $34.95 Canadian.