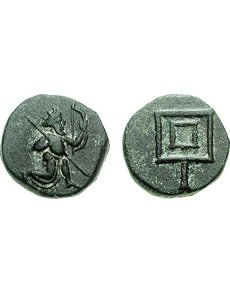 This mysterious bronze of 13 millimeters diameter was struck in the mid-fourth century B.C. for a Persian satrap in Ionia. The coin shows a hero or king on the obverse and has an unidentified design on the reverse. 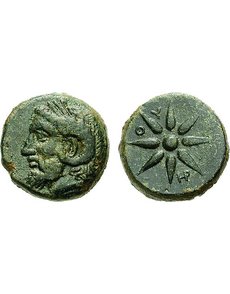 This 16-millimeter bronze was issued during the fourth century B.C. at Thymbria in Troas. It shows the head of the god Zeus-Ammon and a star of eight rays. 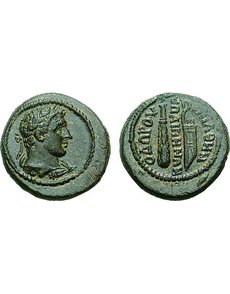 Struck at Hypaepa, Lydia, during the reign of the Roman Emperor Hadrian (A.D. 117 to 138), this 17-millimeter bronze shows Hercules and his club and bowcase. 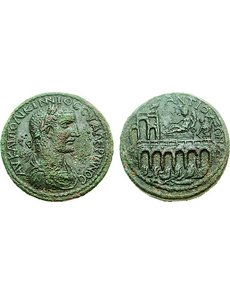 This 35-millimeter bronze struck under the Roman Emperor Valerian I (A.D. 253 to 260) shows an impressive bridge — clearly a source of pride for the people of Antiochia in Caria.
Previous
Next

The land comprising the modern nation of Turkey, commonly called Anatolia or Asia Minor, was home to hundreds of mints that produced many remarkable coin types in electrum, silver and copper or its alloys.

Although a myriad of opportunities exist for the collector of ancient coins, an especially good one is in the bronze coinage of Asia Minor.

The great variety of designs, sizes, places of origin and issuing authorities makes Greek and Roman coins of Asia Minor a fascinating pursuit, whether one is new to the field or an experienced collector looking for a new challenge.

Greek and Roman bronzes were struck in Asia Minor for nearly nine centuries, from just before 400 B.C. through the late fifth century A.D. Thereafter, bronze coinage continued to be struck by the Byzantine Empire and its regional rivals.

Although coinage was invented in Asia Minor, bronzes do not seem to have been struck there until at least a few years after they were issued in Sicily, Italy and Greece, Greek bronzes being produced in those nations perhaps as early as 420 B.C. The first Greek bronzes of Asia Minor may have been struck on Samos, an island just off the western coast. Currently they are dated from about 412 to 405 B.C.

Two extremely interesting issues from the city of Astyra in Mysia from about 400 to 395 B.C. are dedicated to the Persian commander Tissaphernes. The reverse of one shows Tissaphernes on horseback and another bears his bearded portrait; in both cases he is identified by the accompanying inscription “Tissa.”
Beyond issues from a few mints, including Ephesus, Magnesia, Clazomenai and Colophon, one is hard-pressed to find many bronzes of Asia Minor that for certain predate 350 B.C. However, once the idea took root — largely after the Persians were overthrown by Alexander III “the Great” in 330 B.C. — this region became the most prolific issuer of ancient bronzes.

The denomination names are not known for most of the coins, and they typically are now categorized by their diameter. A coin of 22 millimeters in diameter is normally described as an “AE22.” An equally generic value is placed on the composition of the metal, be it copper or one of its alloys, such as brass, bronze or leaded-bronze. In general, they are all described as “bronzes.”

Since hundreds of cities in the region struck bronzes, some collectors try to acquire at least one coin from each city. This provides a challenging goal for any collector. Since many of these coins are rare, yet not necessarily valuable, building a collection requires constant searching and an up-to-date check list.
The designs on such coins are remarkably varied, and a great many themes can serve as collecting goals: deities, animals, plants, sea creatures, mythological creatures, buildings, ships, athletic games, armor, weaponry and musical instruments, to name just a few.

Greek bronzes were struck by independent cities in Asia Minor well into the period of Roman presence, which started strongly in the latter part of the second century B.C. In this early phase the Romans had little interest in forcing the Greeks to adapt to Roman ways. Indeed, they preferred to interfere as little as possible, lest it create inefficiencies that would reduce the tax revenue and resources they hoped to gain.
It was only after nearly two centuries as masters of Asia Minor that the imprint of the Roman monetary system began to show. It becomes noticeable after the fall of the Roman Republic in the civil war that culminated in 31 B.C. with the defeat of Marc Antony by Octavian at the Battle of Actium.

Even so, the fundamentals did not change, and cities still issued coins for local use in their own name (with Roman permission, of course). The coins issued by Greeks under the authority of the Roman Empire are called Roman Provincial or Greek Imperial coins, and they are avidly collected.

Just as in earlier times, these coins had patriotic designs that tended to celebrate the most famous aspects of their city. The only difference was that the obverse usually bore the portrait of a Roman emperor, empress or caesar, and “local” designs were limited to the reverse.

Denominations also did not radically change. The traditional “Greek” silver coinages based on the drachm — roughly equal to a Roman denarius — continued to be used at the few mints that the Romans allowed to coin silver. Bronzes were equally “Greek” in character, being struck in sizes ranging from less than 15 millimeters to more than 50.

Collectors today are fortunate that the Romans allowed the Greeks to preserve some sense of identity within their empire; coins were a perfect format for that expression, even if Rome was the final authority in their lives.

Like the autonomous Greek coinages of earlier centuries, Roman provincial bronzes are often collected by the issuing city. More than 600 Greek cities and Roman colonies issued coins in the Roman era, a good percentage of which were in Asia Minor. Needless to say, attempting to find even one example from each city is a major task that requires perseverance.

Since the reverse types tend to reflect aspects of local culture, that is, perhaps, the most popular source of collecting interest. The full range of types defies satisfactory description, though the most common types present a local deity or deities.

Collecting by issuer is also a popular approach for provincial coins. This includes not only emperors, empresses and caesars but their relatives, both living and deceased. An active cult for emperor worship resided in Asia Minor, and cities vied with one another to demonstrate the degree of their devotion in hopes of earning honors and privileges.

By the late third century A.D., Roman monetary policy had greatly advanced. Standard “imperial” coinages were being struck empire-wide, and there was no longer a need for provincial coins. The legacy of provincial coinage in Asia Minor ended with issues of the emperor Tacitus (A.D. 275 to 276), after which the only provincial mint that remained was in Alexandria, Egypt, until it, too, closed in A.D. 296.
Thereafter, all of Roman coinage was produced at imperial mints. ¦