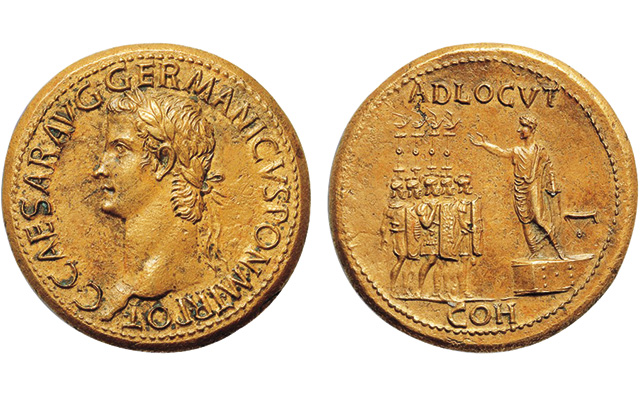 A rare bronze sestertius of Caligula was apparently presented to a member of his praetorian guard during a special ceremony shown on the reverse.

A rare circa 37 to 38 A.D. bronze sestertius of Roman emperor Caligula realized a hammer price of 600,000 Swiss francs ($633,700 U.S.) in an Oct. 20 auction conducted jointly by Numismatica Ars Classica and Tradart.

Lots were subject to buyer’s fees ranging from 19 to 21.5 percent, depending on bidding method. The winning bidder's bidding method was not revealed, so the total cost of the coin could not be computed.

Though the coin features “a portrait of enchanting beauty and the work of a very skilled master-engraver,” according to the auction catalog, the coin is notable for what it does not have, and what that indicates about why it was issued.

Many Roman coins bear the giant letters SC, shorthand for “senatus consulto” or “senatus consultum.” The fact that they are missing from this coin suggests that the coin was not issued with the approval of the Roman senate. This was an obvious statement of authority by the fairly new leader Caligula.

“There is no reason to believe its exclusion was accidental,” according to the catalog. “The inescapable message to the senate was that the emperor’s newfound authority was assured by his relationship with the [prateorean] guard.”

Tiberius died in 37 A.D., perhaps with the aid of Sertorius Macro, who had authority as a prefect in the prateorean guard; Macro then offered his support to Caligula, who received full authority from the state.

Tiberius’ will allocated 1,000 sestertii for each guard, an amount that Caligula doubled upon realizing that his power rested largely in the support of the guard.

These payments were handed out during a ceremony that is presumably pictured on the coin’s reverse, where Caligula is shown standing before the seat of the army chief, delivering a speech to five soldiers. The inscription ADLOCVT COH describes the image, the abbreviation identifying the adlocutio (speech from the emperor to his army).

The coin is “extremely rare and undoubtedly the finest specimen known of this issue and one of the best sestertii in existence,” with a centered strike on a large flan.

The auction firm reports that it is Good Extremely Fine and exhibits "Tiber toning," meaning that it could have been recovered from soil such as is found along the Tiber River.

To learn more about the auction, and to see other prices realized, visit the Numismatica Ars Classica website.