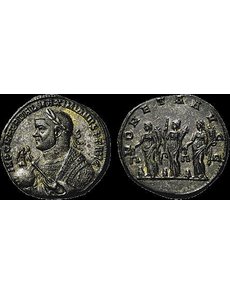 A circa A.D. 286 to 305 bronze medallion of Maximianus highlights Nomos AG auction No. 5, scheduled for Oct. 25 in Zurich, Switzerland.

A circa A.D. 286 to 305 bronze medallion of the Roman emperor Maximianus highlights Nomos AG auction No. 5, the firm’s first fall auction.

The auction, which is scheduled for Oct. 25 in Zurich, Switzerland, features 269 lots of European medals, and Greek, Roman and Byzantine coins.

The 34-millimeter medal “undoubtedly was struck to commemorate the supposedly victorious nature of the emperor’s rule,” according to the cataloger. The medal is the finest example known and “probably the finest surviving base metal medallion from the period of the Tetrarchy.”

A buyer’s fee of 18 percent applies to all winning bids, with an additional 3 percent fee for successful live Internet bids.

The auction catalog is posted online both at the firm’s website at www.nomosag.com and at www.sixbid.com.

For more information, email the company at info@nomosag.com or write to it at Nomos AG, Postfach 2664, CH 8022 Zürich, Switzerland.

Holy Roman Empire, Maximilian I, circa 1508 to 1519 silver medal, on the pardon of Franz von Sickingen, “actual maker of the medal is unknown, but the design was probably that of Hans Burgkmair the Elder,” Lot 3, “unevenly toned, otherwise” Extremely Fine.

Italy, Milan (?), Charles V, circa 1551 to 1556 silver medal, 97.4 millimeters, cast and chased, possibly by Leoni “but this is debated,” “probably the only known example in silver,” Lot 33, “very minor bangs and, on the edge, possible traces of having been inset into a holder, otherwise” EF.

Greece, Bruttium, Rhegion, circa 445 to 435 B.C. silver tetradrachm, Lot 109, “some minor traces of overstriking on the reverse, otherwise” EF.

Greece, Mysia, Lampsakos, circa 394 to 350 B.C. gold stater, “formerly in the Cabinet des Medailles in Paris,” Lot 178, “struck from worn dies with some very slight die rust on the obverse, otherwise” Nearly EF. ¦