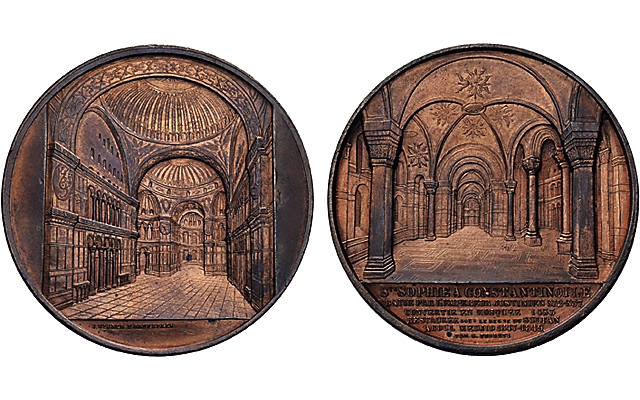 A bronze medal from a series of medals created by famed sculptor Jacques Wiener sold May 23 in Sincona AG’s auction No. 18.

The medal, showing the Hagia Sophia in Istanbul, Turkey, is in About Uncirculated condition. It realized 1,495 Swiss francs (about $1,672 in U.S. funds), including a 15 percent buyer’s fee, against an estimate of 1,000 Swiss francs.

The medal was issued to celebrate the restoration of the center of worship that served as a Greek Orthodox basilica and, later, an Islamic mosque. The Hagia Sophia is now a museum.

Wiener (also known as Jacob) was part of a famous Jewish-Flemish family of engravers and artists. Born in Hoerstgen, Germany, in 1815, Wiener studied in Paris and then settled in Brussels.

The eldest of  three brothers, Jacques generally signed his medals as J. Wiener (or, occasionally, as Jacob). Leopold and Charles were also renowned for their medal engraving.

In 1845, at age 30, Wiener decided to engrave medals representing the exterior and interior of monuments, mostly churches, with a degree of precision of detail previously unseen on medals, according to HistoricalArtMedals.com.

He began with a series of 10 medals (each measuring 50 millimeters in diameter) showing famous churches of Belgium, all but one of these with the assistance of Leopold.

Next Jacques Wiener undertook what was to be a series of 50 medals, each 59 millimeteres in diameter, to represent the principal cathedrals, churches and mosques of Europe (plus one synagogue).

Even with the assistance of his brother Charles, the series halted after 41 medals because Wiener had almost completely lost his eyesight by 1872 (at age 57). After 1874 (age 59) he produced no more medals.

Before his career ended, Jacques Wiener was prodigious, engraving dies for a large number of other monuments, including prisons, town halls and more, with at least 233 medals and 62 jetons cataloged. His work is celebrated for showing among the best renditions of perspective of building interiors.

The medal offered by Sincona is “very rare” and shows an interior of the church on the obverse with an interior view of the crypt on the reverse.