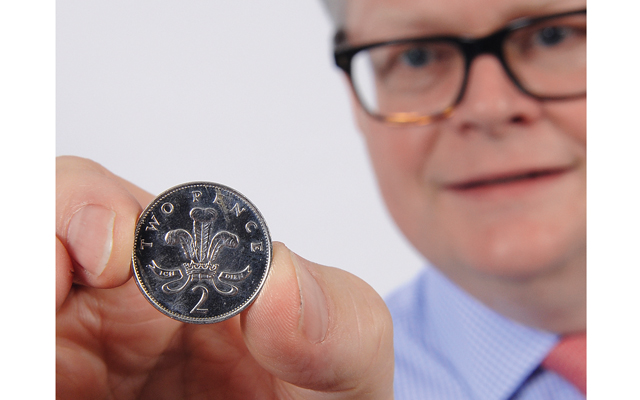 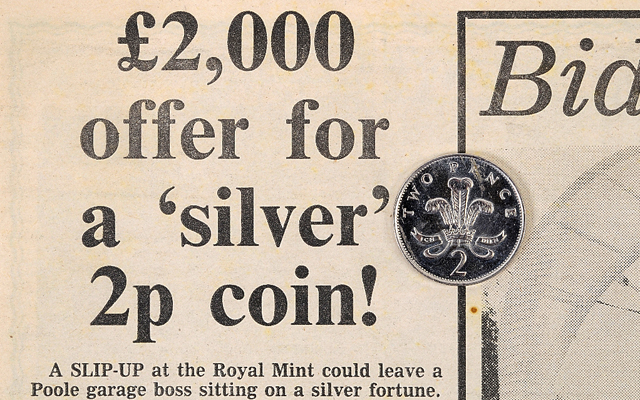 The 1988 copper-nickel two-pence coin appears with a press clipping from the time of its discovery.

The 1988 2-penny coin, struck in copper-nickel and possibly on a planchet intended for South Africa’s 50-cent coin, was sold in a sale by Dorset-based auctioneer Charterhouse.

The error coin is reportedly unique, according to Richard Bromell, director of Charterhouse.

“I have had an interest in coins for over 40 years, but this [two-pence] takes the biscuit as I have never heard of one before the owner brought it into our salerooms for advice. I must admit to being somewhat sceptical at first, thinking it was silver plated which often happens, but it is the real deal!” Bromell said, in a press release.

The coin was reportedly discovered the year it was minted when the consignor, who operated a gas station in Poole, discovered it when he opened a new pack of 2-penny coins.

The seller, identified as David Didock by the Daily Mail, reportedly rejected an offer to sell the error in 1988 for £2,000, the auction house said, pointing to a pair of newspaper clippings accompanying the coin in the auction lot.

According to the auction house, “The Royal Mint believed a cupro-nickel blank must have gotten into their coin making system by mistake, possibly when changing minting South African coins to British coins.”

The closest comparable is the South African 50-cent coin, which measures 27.8 millimeters (compared with the British 2-penny coin, which is 25.9 millimeters in diameter). Both coins have plain edges.

Standard twopence issued from 1971 to 1991 are struck from bronze, so the error would stand out when struck in an off-metal.

The obverse of the error carries the Raphael Maklouf effigy of Queen Elizabeth II. Christopher Ironsides’ standard design for the reverse of the denomination features (which was used until 2008) Welsh plumes and a crown.

For further information about the auction, telephone Charterhouse at (011) 1935 812 277, email the firm or visit its website.