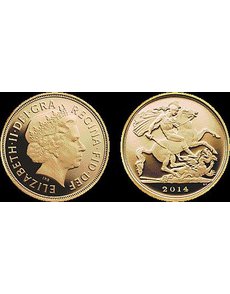 Current sovereigns of Great Britain carry the Ian Rank-Broadley effigy of Queen Elizabeth II on the obverse and St. George killing the dragon on the reverse. 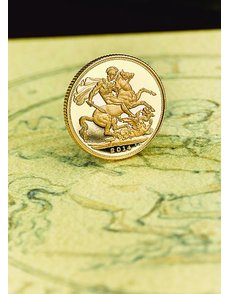 The 2014 gold sovereign marks the centennial of the start of World War I. The reverse of the coin carries the famed Benedetto Pistrucci design, seen in the sketch in the background.

Nearly 100 years ago, the machinery of war was fueled by gold sovereigns.

The Royal Mint is celebrating the coin’s critical role in World War I financing with the Nov. 1 release of 2014 sovereign coins.

The .9167 fine gold coins continue to showcase the traditional St. George slaying the dragon design, first created by Italian engraver Benedetto Pistrucci for the reverse of the 1817 sovereigns. The 2014 sovereigns do not bear any special marking to commemorate the centennial, though materials included with the coins tell the story of the wartime issues.

After its introduction in 1817, the sovereign quickly became trusted and recognized in world commerce. At the outbreak of World War I, Britain needed money to finance the war effort, leading to appeals to the patriotism of British citizens to give up their sovereigns for their country. Bank notes were introduced into regular circulation, and within a few years, the sovereign ceased to be used in everyday transactions.

“In only a short time the new notes took the place of the current gold coinage,” according to Michael Marsh in The Gold Sovereign.

An abundance of sovereigns were struck to become part of the gold reserves held by the Bank of England, which in turn were used to pay war debts to the United States, according to Marsh. The coins were almost certainly melted and made into ingots, he wrote.

Production of the sovereign as a circulation coin stopped completely in 1917 but in 1957 the Royal Mint recommenced striking of the coin.

The coins do not bear a denomination, but their face value is determined by the weight of the coin.

The standard sovereign weighs 7.98 grams and measures 22.05 millimeters in diameter. In addition, fractional and multiple versions of the sovereign are available, with a quarter-, half- and double-sovereign joining a 5-sovereign coin. Currently produced sovereigns are sold in Brilliant Uncirculated and Proof versions at collector premiums, and in bullion form with a slight premium above metal value, though not all versions are available for every size.

Sales of the BU and Proof examples began Nov. 1, with bullion coins to go on sale later in November through bullion distribution channels.

The quarter-sovereign weighs 1.997 grams and measures 13.5 millimeters in diameter. The Proof version has a mintage limit of 4,575 examples, with 3,000 available individually for £115 each.

The 2014 sovereign three-coin set features the two fractional sovereign coins and the flagship sovereign. It has a limit of 750 sets and costs £750 each.

The Proof double-sovereign weighs 15.97 grams and measures 28.4 millimeters in diameter. It has a mintage limit of 1,325 pieces, but is not offered individually, and is only available in either of two special sets.

One of the two sets is the 2014 sovereign three-coin premium set, which contains the double-sovereign, the sovereign and the half-sovereign. A total of 500 sets are available, for £1,500 each.

The other set with the double-sovereign contains all five coins in Proof and has a limit of 750 sets, priced at £3,600.

The 5-sovereign coin weighs 39.94 grams and measures 36.02 millimeters in diameter. It has a maximum mintage of 925 pieces, but the Royal Mint has not disclosed whether it will be offered for sale individually or only in the five-coin set.

Each coin or set is accompanied by a numbered certificate of authenticity and a booklet telling the story of the sovereign of 1914. Some products, like the five-coin set, are presented in other packaging.

Delivery of some of the collector versions begins Nov. 18, though some products are scheduled to ship beginning Nov. 25.