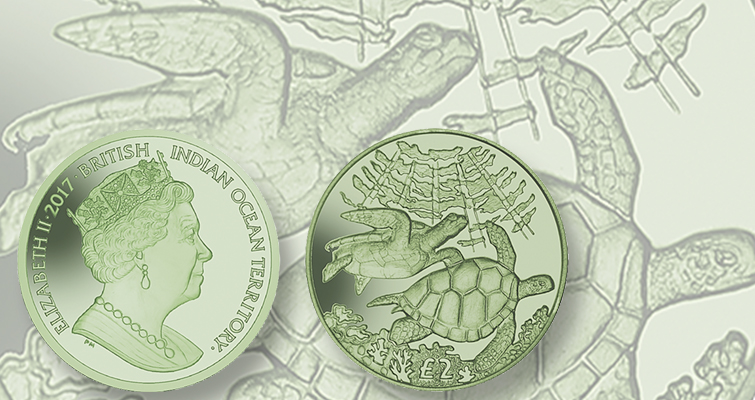 The Pobjoy Mint has created a green titanium £2 coin issued in the name of the British Indian Ocean Territory and depicting the green turtle.

The coin celebrates the green turtle (Chelonia mydas). As titanium reacts differently with every strike, each green turtle coin is technically different and varies slightly in color. The a lined effect on the coins is also unique to this metal. In addition to the green-colored titanium version, an Uncirculated copper-nickel version is also available.

The reverse of the coins shows a pair of turtles swimming in unison with the sun warming their shells. The obverse features the Pobjoy Mint’s exclusive effigy of Queen Elizabeth II.

Green turtles are large sea turtles with a name that refers to the color of the fat found beneath their carapace. (Their shells, ironically, are brown to black in color.) These large migratory herbivores often inhabit shallow lagoons but also travel long distances between feeding and nesting grounds.

Among places green turtles can be found nesting are the beaches of the Chagos Islands, and particularly Diego Garcia, which is part of the British Indian Ocean Territory. Between 400 and 800 of these majestic animals nest annually throughout the Chagos and are well protected. This is most evident in Diego Garcia where approximately 50 percent of the whole island is a protected nature reserve. It is here that the adult females can lay their eggs without the threat of human intervention.

The green turtle’s diet changes as it grows. As juveniles they are carnivorous, but as they mature their diet changes to include more and more vegetation, and fully mature adults are often strict herbivores. The turtles’ feeding trips underwater usually last about 5 minutes but they can actually hold their breath for up to five hours.The copper-nickel coin weighs 28.28 grams and measures 38.6 millimeters in diameter. It has a mintage limit of 10,000 pieces and retails for $16.95 each.

The titanium coin weighs 10 grams and measures 38.1 millimeters in diameter. It has a mintage limit of 7,500 pieces and retails for $59. 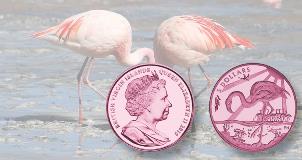 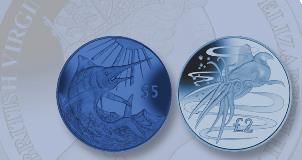