Britannia to return to circulating British coinage in 2015 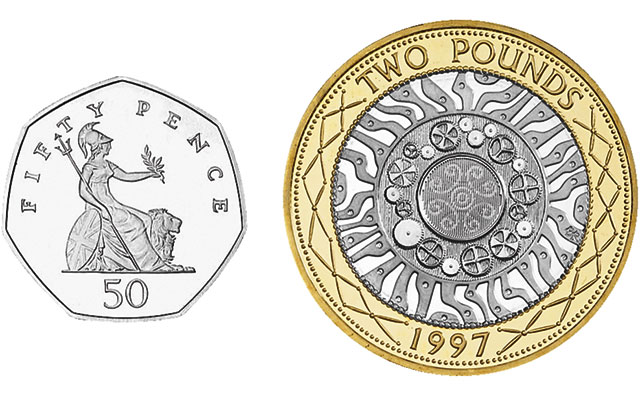 Britannia, last seen in circulation on the 50-pence coin in 2008, left, will return to coinage of the United Kingdom, replacing Bruce Rushin’s €2 design used since 1997.

One of the biggest pieces of news to come out of the World Money Fair Media Forum on Jan. 30 was supposed to stay secret.

The Royal Mint announced that the iconic symbol of Britain, Britannia, would make a return to British coinage in 2015. But after the show, the Royal Mint told Coin World that the announcement from its Director of Commemorative Coin, Shane Bissett, was supposed to be a secret.

A spokesperson told Coin World, “The reveal is to be very soon, in terms of weeks, but we will make sure that we give you as much advance notice and info as possible.”

The Britannia design will replace Bruce Rushin’s History of Technological Achievement design on the ringed-bimetallic £2 coin, which has been issued since 1997.

Britannia was most recently found on the 50-penny coins issued after decimalization, from 1969 until a redesign in 2008, when the elements on British circulating coinage from the penny to the £1 coin were all removed, leaving the £2 coin the only coin without a fresh look this century.

Britannia has a long history on coins of the United Kingdom, dating back to ancient Roman Britain, and has been the marquee symbol for its precious metal program since 1987.