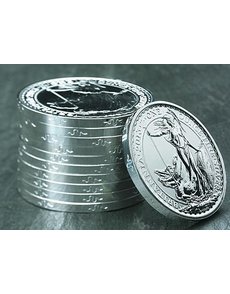 The Royal Mint adds a Year of the Snake privy mark to the edge of some 2013 Britannia 1-ounce silver £2 coins.

A subtle addition to the Britannia silver coin is a big deal to the Royal Mint.

Royal Mint officials announced the continued expansion of its Britannia bullion program with the release of a Britannia 1-ounce .999 fine silver bullion £2 coin sporting a privy mark. The privy mark, which distinguishes the coin from the standard 2013 Britannia silver bullion coin, is on the coin’s edge.

A privy mark is a usually small device used on coinage. Today, privy marks are generally used for marketing and promotional purposes, and are often commemorative in nature. The added adornment brands the coin as special, and can be a logo, words or a combination of the two. On the new Britannia, the privy mark celebrates the Chinese lunar-solar Year of the Snake.

Privy marks generally appear as a design element or in the field of a coin.

While world mints like the Royal Canadian Mint and the Perth Mint have issued privy marks for more than 15 years, this is the first for the Royal Mint. Britain’s use of a privy mark follows the adoption of .9999 fine gold and .999 fine silver for Britannia bullion coins beginning in 2013. Royal Mint officials seek to capture a larger share of the bullion market, which generally favors pure metal coins over those of lesser fineness. (Britannia bullion coins previously were composed of .9167 fine gold and .925 fine silver.)

The privy mark takes the form of curled figures of a snake appearing at intervals around the edge of the coin.

Philip Nathan’s Britannia figure appears on the reverse, with the Ian Rank-Broadley effigy of Queen Elizabeth II on the obverse.

The privy marked Britannia silver coins were produced for precious metals dealer A-Mark in the United States, which offers the coins exclusively on a wholesale basis. A representative of A-Mark referred customers asking about the Snake privy mark coin to retailer Merit Financial.

Royal Mint officials confirmed the mintage for the silver privy marked Britannia is “in excess of 500,000 with no limit,” while noting no plans for a privy-marked gold version.

At press time, Merit Financial offered the coin only in rolls of 20, for about $700, or about a 46 percent premium above the precious metal price.

For more information, or to order the coin, visit Merit Financial’s website, www.meritgold.com, or telephone the firm at 800-515-5019. ¦