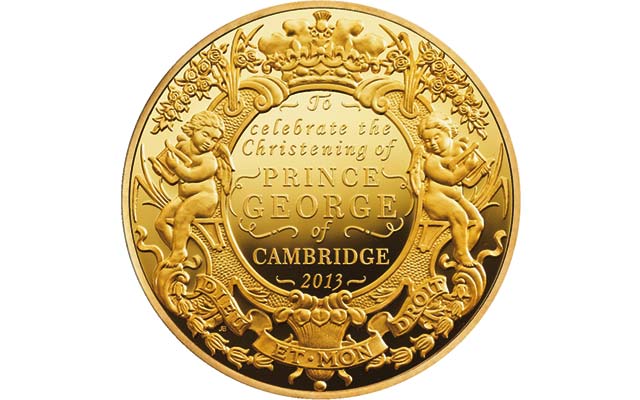 The Royal Mint will commemorate the christening of Princess Charlotte of Cambridge with a range of official United Kingdom coins.

The event is scheduled for July 5 at St. Mary Magdalene Church at Queen Elizabeth II’s Sandringham estate in Norfolk.

The commemorative design will be available in silver, in keeping with the tradition of crossing a newborn’s palm with silver to confer good health and prosperity, and also in gold to mark the royal celebration.

The design will be approved by the Duke and Duchess of Cambridge, Queen Elizabeth II, and the Chancellor of the Exchequer. The Royal Mint will reveal the design in the next couple of weeks, officials announced June 18.

This is the second royal christening the Royal Mint will have honored on coins, having released 2013 coins for Prince George, the older brother of Princess Charlotte.

A special limited edition £5 coin from the Royal Mint marked the birth of Princess Charlotte May 2, 2015.

Shane Bissett, director of Commemorative Coin at the Royal Mint, said: “It is only appropriate that we commemorate this significant occasion with the release of a special coin, just as we celebrated the christening of Prince George.”

Collectors may register their interest in the christening coins at a special page on the Royal Mint website.