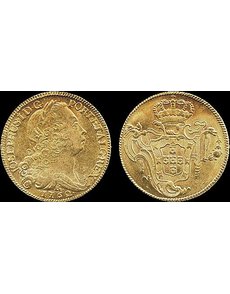 Coins from the Rio de Janeiro Mint are far more accessible than those of the Bahia Mint. However, a 1762/1 gold 6,400-real coin is rare and the overdate error is unlisted in the standard reference on the series. 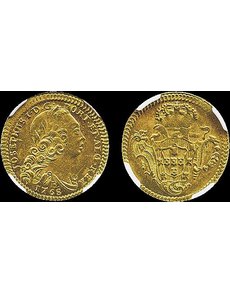 Brazil is among a group of nations whose economies are projected to surge over the next few decades.

The so-called “BRICS” are expected to lay the foundation for a shifting global economy. Countries in the bloc are Brazil, Russia, India, China and South Africa, and it is probably no coincidence that in the past five years or so, the markets for most of those nations’ coins have garnered many headlines.

Agustín Garcia-Barneche of auction firm Daniel Frank Sedwick believes the Brazilian market for coins is poised for growth because of many economic indicators underpinning Brazil’s national economy, like the gross domestic product, positive consumer confidence, a larger middle class and an influx of foreign investments.

The fact that the world will turn its attention to Brazil for two major sporting events within a few years — the 2014 FIFA World Cup tournament and the 2016 Summer Olympic Games — also bodes well, according to Garcia.

No economic slouch, Brazil has been counted among the top 10 world economies since 1990, in recent years ranking seventh. Projections are that it will only improve its ranking in coming decades.

Daniel Frank Sedwick’s next auction, which closes May 1 and 2, offers an opportunity to explore the Brazilian numismatic landscape, through what is being called the New England Collection.

Don’t let the name fool you — the consignment is a type collection of Brazilian coins, mainly from the Bahia Mint but also of coins from the Rio de Janeiro Mint, with many finest-known pieces and unique dates and varieties, according to the firm.

Brazil’s numismatic history was shaped by the colonial powers that ruled it, with Portuguese coins (and the omnipresent Spanish colonial silver dollars, often countermarked in reals, the local denomination) dominating until Brazil opened its first mint, at Bahia, in 1694.

After five years, the mint at Bahia was transferred to Rio de Janeiro, and in 1700 was moved to Pernambuco before closing in 1702. Rio de Janeiro became a minting site again in 1703, and a new Bahia Mint was established in 1714. The final Brazilian mint, at Villa Rica de Ouro Preto in Minas Gerais, operated from 1724 to 1734.

Two highlights from the New England Collection’s first offering could be portals to the Brazilian series.

According to Garcia, coins of the second Bahia Mint are much rarer than those struck in Rio, which had the finest dies, best assayers and minting equipment (Portugal provided the dies and machinery).

“Bahia was in comparison way smaller with a less accurate execution with a more crude product which was way more scarce due to less resources and labor,” Garcia-Barneche said.

As the capital, Rio struck significantly more coins than the branch mints, with Garcia-Barneche likening the relationship between Bahia and Rio to another that U.S. collectors might understand.

“Metaphorically speaking,” the Rio de Janeiro Mint was like the Philadelphia Mint for the United States and the Bahia facility was sort of the Dahlonega Branch Mint, he said.

The highlight of the first portion of the sale comes from the Bahia Mint. The 1768-B gold 1,600-real coin is graded About Uncirculated 58 by Numismatic Guaranty Corp., making it the “finest-known” example graded by NGC, according to Sedwick. The auction house reports the coin is conservatively graded.

The coin is cataloged as Russo O362 by Arnaldo Russo in Catalog de Moedas do Brasil.

Any date of this denomination from the Bahia Mint is rare, with usually only one or a few known for each date.

The higher denomination coins often have greater mintages than the smaller coins, Garcia-Barneche said. The example from the New England Collection features an unlisted overdate error, which is rare. The design type is listed as R-O430 in the Russo catalog.

Live on the Internet

Brazil’s coinage includes issues from the Bahia Mint, which was not as advanced and prolific as the Rio de Janeiro Mint.