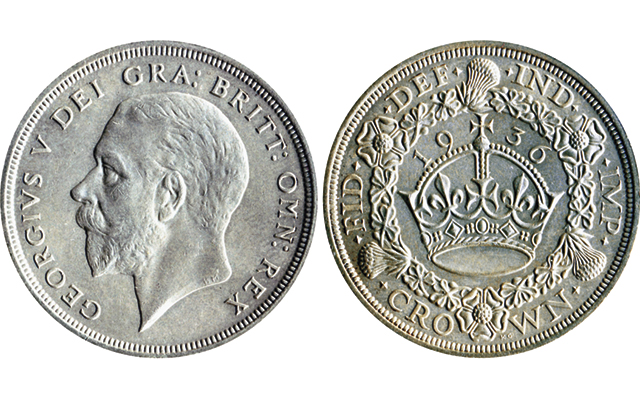 Only 2,473 examples of the 1936 British silver crown (with a face value of 5 shillings) were minted. In the early 1960s, little numismatic interest was shown in these or related rarities.

In my two most recent columns I told about nice times in London in the 1960s where I went to buy American, British and other coins.

At the time, the British coin market was vastly different from that in America. The British market had no equivalents to Whitman folders, and collecting coins from circulation was not a popular hobby.

Even among specialists in British coins, little interest was shown in 20th century coins. Some stopped with the last issues of Queen Victoria in 1901, and others stopped with King William IV in 1836.

As a result many really rare 20th century coins were available that had few buyers. Of particular interest to me were the silver crowns or 5-shilling pieces. These were minted in 1902, following by a long jump to 1927 when 13,030 were struck for Proof sets issued this year — the making of Proof sets being very intermittent (the next set was produced in 1937).

Among the dealers, Doug Liddell, manager of Spink’s, was my main source for coins, from copper to gold. I liked the Proof 1935 raised-edge crowns, and Spink’s had nearly 100 in stock, in two flat drawers in a wooden cabinet.

Each coin was in the square red box of issue and was priced retail at £10. I asked how many I could buy. “I need to limit you as these will be advertised in our next magazine,” he told me. I was allowed to buy 10 pieces at a courtesy 10 percent discount.

“How many can I buy at your full list price?” I asked.

“How many beyond that can I buy at 10% OVER your list price?”

In 1953, the Royal Mint issued a commemorative crown for the coronation of Queen Elizabeth II.

Doug Liddell happened to remember that in a store room he had many thousands of unsold pieces each in its original wood box. Would I like to buy them all? The answer was yes, at face value (5 shillings) plus sixpence (half a shilling) each.