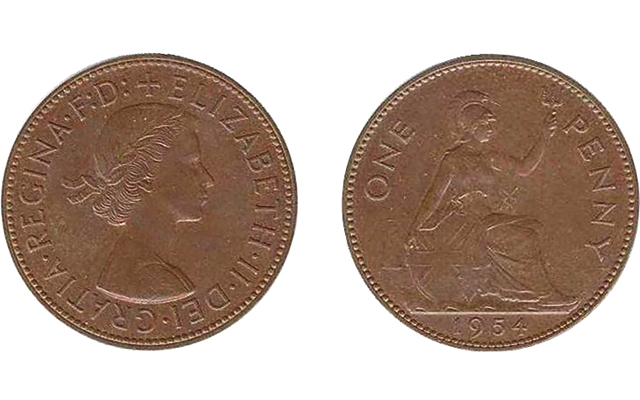 The unique 1954 British copper penny purchased by the writer in 1963 was a particularly interesting piece acquired during a visit to England.

When I was buying coins in Europe in the early 1960s, a typical trip would start in London with visits to the “big three” dealers: Spink & Son, B.A. Seaby Ltd., and Baldwin’s.

I usually bought a lot from Spink, in particular, where the Doug Liddell was in charge. American tourists frequently came into the Spink office seeking what American coins might be available. In a curious turnabout, when back in the United States, I often shipped Mr. Liddell common large cents and the like that he could sell more easily than I could!

I never had much luck at the Baldwin office, more conservative and old-line than the other two. I was advised that whenever choice coins appealing to American buyers were on hand, Emery May Holden Norweb was given first choice, after which New York City dealer Lester Merkin was given the option.

I also dealt with many collectors in London. Some years ago Myron Xenos of The Money Tree, dealers in numismatic literature, sent me a back copy of the British publication, Country Life, dated Dec. 12, 1991. On page 64 was shown the unique British penny dated 1954, and a mention of my buying it in 1963, amid derisive comments from onlookers who did not think that such a modern rarity would have great value.

This brings to mind that pleasant day over 50 years ago when I visited the owner of the coin, C. Wilson Peck, in the living room of his London home.

As was the case with many British collectors at the time, Mr. Peck, a pharmacist by trade, kept his coins in cabinets on the premises. Security problems then weren’t what they are now.

He told about endeavoring to sell his coins, and stated that certain of the “establishment” dealers in England were used to buying very cheaply, whereas Americans such as I were said to be more eager to buy and at higher prices.

In any event, he said that if there was anything I would like to purchase from his immense collection, he would be happy to quote a price to me!

I picked out the unique 1954 British penny, which he had possessed since nearly the time it was minted, and his unique 1808 British penny and several other items.

A price was agreed upon, and both parties were satisfied. I also bought a number of other coins, including Soho Mint patterns and off-metal strikings.

Today, Mr. Peck has long since passed from the earthly scene, but I still think of him now and then, especially when I consult his mammoth book, English Copper, Tin and Bronze Coins in the British Museum 1558-1958. He was a fine gentleman, a numismatist in the truest sense.