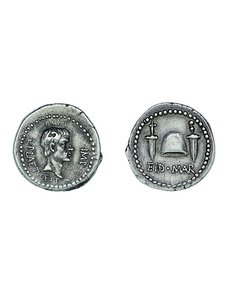 A Roman silver denarius with head of M. Junius Brutus, struck under L. Plaetorius Caestianus, circa 43 to 42 B.C. is one of the many ancient coins scheduled to be displayed at the Boston Museum of Fine Arts.

Five hundred ancient Greek and Roman coins from the Boston Museum of Fine Arts’s holdings will be showcased in the inaugural exhibition of the museum’s new Michael C. Ruettgers Coin Gallery, beginning in September.

The collection will be a permanent exhibit in the museum’s Behrakis Wing for Art of the Ancient World, according to Richard Grossmann, consulting curator for numismatics.

The exhibit is named in recognition of Michael C. Ruettgers, who donated 14 Roman gold coins to the museum, including gold aureus coins featuring such Roman notables as Aelius Verus, Septimus Severus, Trajan, Antoninus Pius, Caligula, Domitian, Quintillus and others.

Grossman says: “The Ruettgers Coin Gallery will be the focal point for numismatics at the MFA, but smaller groupings of ancient coins will continue to be integrated into other permanent ancient art galleries at the MFA, as they have long been. Post-antique coins and medals are also on display in several European galleries and throughout the American Wing. In addition, coins are sometimes incorporated into temporary exhibitions — for example, ‘Aphrodite and the Gods of Love,’ currently on view in the Torf Gallery, includes a selection of Greek and Roman coins related to the exhibition’s themes.”

Grossman says: “The vast majority [of coins] were either given to the Museum by donors or purchased by the Museum on the market. The core of the MFA’s Greek coin collection — like its Classical art collection generally — was built by Edward Perry Warren, who in the final decade of the 19th and first two decades of the 20th century purchased large numbers of coins on the European market on the museum’s behalf and donated others.

“The other central figure is Theodora Wilbour, who gave the MFA many important Roman (and some Greek) coins from her collection — mostly anonymously in memory of her sister, Zoë — in the mid-1930s; at least as significantly, upon her death, she endowed the Theodora Wilbour Fund in memory of Zoë Wilbour, an acquisition fund that to this day enables the MFA to collect coins at the very highest level.

“Finally, I would add that Cornelius Vermeule, in addition to steering the collection in his role as longtime curator of Greek and Roman art, also donated several hundred coins to the MFA. As for Mr. Ruettgers, the 14 coins he has given to the Museum in the past three years — all Roman gold coins of the very highest caliber — have had a dramatic impact on the quality of the Museum’s holdings in that area.”

Though other institutions, such as museums and universities, display coins, the Boston Museum of Fine Arts believes its Ruettgers Coin Gallery will be unique, with Grossman pointing out the gallery’s “primary emphasis on Greek and Roman coins as works of art (though their roles as economic instruments and historical documents will also be explored).”

For those unable to see the exhibit in person, Grossman says: “The MFA’s entire collection of Greek, Roman, and Roman Provincial coins are accessible through the MFA’s website (www.mfa.org/collections), as are substantial numbers of coins of other cultures; additional images are being uploaded to the web all the time. For a given coin, the listing on the website indicates whether it is currently on public display at the Museum and, if so, in which gallery.” ¦