A new silver collector coin is backed with bitcoins 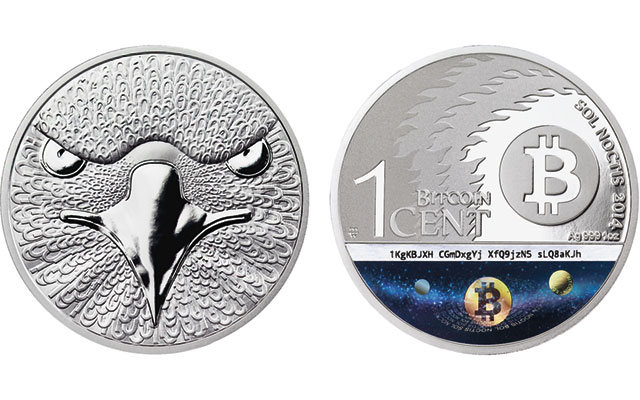 The first of the Sol Noctis series of 1-ounce .999 pure silver pieces denominated in bitcoins is known as the Binary Eagle and will be made available by TopWorldCoins on Dec. 5. 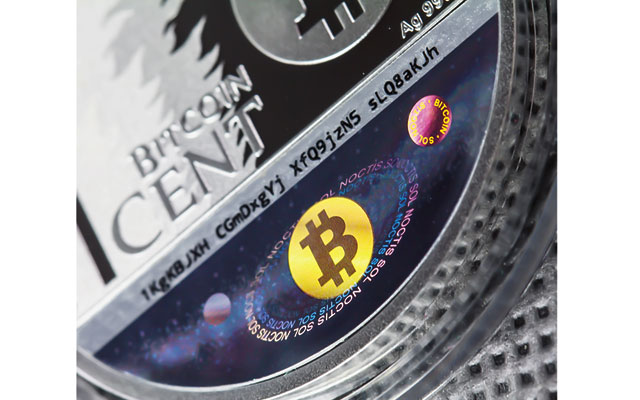 On the bottom portion of the Binary Eagle's reverse is a sticker with bitcoin wallet keys printed on it, protected by a hologram.

A new silver collectible piece backed with bitcoins is expected to hit the market this winter.

The first of the Sol Noctis series of 1-ounce .999 fine silver pieces denominated in bitcoins is known as the Binary Eagle and will be made available by TopWorldCoins on Dec. 5.

“We created Sol Noctis to mark the point where two worlds meet: traditional numismatics and a payment system of the future, and so to push the limits of both of them,” TopWorldCoins general manager Danylo Knysh said. "It’s a thrill to integrate such a unique and universal cryptocurrency into a high quality physical product.”

The Binary Eagle was struck by the Mint of Poland. Each piece features an obverse occupied completely by an image of an eagle’s face — eyes, beak and feathers. The reverse contains the inscriptions, 1 BITCOIN CENT, SOL NOCTIS 2014, and AG .999 1 OZ., as well as a prominently placed Bitcoin logo.

On the bottom portion of the reverse is a sticker with bitcoin wallet keys printed on it, protected by a hologram.

"A special technique of E-Beam Nanogra was applied to create a hologram with maximum protection against counterfeit,” a release from TopWorldCoins reads. "Thanks to it, four levels of security features are embossed into the holographic foil with a resolution of 550,000 dpi.”

A private key is needed to redeem the face value and is located under the piece’s protective hologram.

The holder of the Sol Noctis piece is the only person who has access to it and can realize the face value of the medal at any time.

The total quantity of Binary Eagles minted will not exceed 2,009 pieces, according to TopWorldCoins.