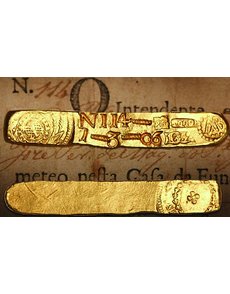 A unique 1832 gold ingot from the Serro Frio foundry in Brazil, an artifact of an era when foundries monetized recently mined gold for use as currency, highlights Daniel Frank Sedwick’s Oct. 25 auction. 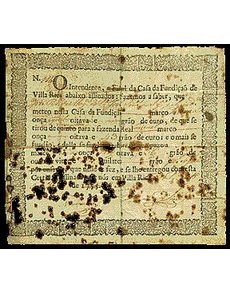 Accompanying the ingot is the official documentation declaring its value and weight, what dealer Daniel Sedwick calls its “birth certificate.” The guia lists the value, fineness, weight, serial number and owner.

All sorts of certificates can and do accompany coins, depending on their source, but a highlight from Daniel Frank Sedwick’s Oct. 25 auction provides a document rarely encountered: a “birth certificate.”

A unique 1832 gold bar from Brazil highlights the firm’s treasure and world coin auction No. 10. It is accompanied by the guia, or “guide,” which Sedwick calls “essentially its birth certificate.” The guia is an official one-page document produced at the foundry legalizing the ingot as currency and bearing the ingot’s number, owner, purity, weight and date.

Last offered publicly in 1948, the 39.74-gram gold ingot is a relic from a 55-year period when gold bars were made from native-mined metals and used in place of and later alongside coinage (according to the Spink Numismatic Circular of March 1903, the circulation gold coinage in Brazil was prohibited from 1750 to 1808).

The piece in the Sedwick auction, numbered 114, is one of about a half-dozen surviving examples issued under Dom Pedro II, the last ruler in the Empire of Brazil, as production waned before the practice finally ended.

From 1778 to 1833, an unknown number of gold bars were produced to stand in for coinage during mostly Portuguese rule. Some 20 foundries operated, but surviving examples of their production, the gold ingots, remain from just eight of the foundries.

“They are comparable to the U.S. pioneer gold issues of the California Gold Rush,” according to Sedwick.

The ingots were issued to monetize new gold into circulating currency and to make sure taxes were paid in the process.

Researcher Alain Costilhes, in a 2005 article, noted two distinct reasons the ingots have attracted attention decades later. “Besides their beauty, the fact that they were used as money adds numismatic value,” he wrote in Actas — Proceedings — Actes of the XIII Congreso Internacional de Numismatica in Madrid in 2003, published in 2005 and coordinated by Carmen Alfaro, Carmen Marcos y Paloma Otero.

Rarity would be another factor. The gold ingots are among the rarest of all South American numismatic items.

Made from natural gold brought in to official refineries for testing, smelting, marking and taxation, the ingots were typically sent to Europe where they were melted. Today, an estimated 218 genuine examples are known to exist, with slightly more than half of these in private hands, the rest housed in national museums in Brazil, Portugal and the United States.

Rarer still is each ingot’s original guia, which also records the foundry name and bears the signatures of its officials at the bottom to show that the tax was paid. According to Sedwick: “The guia was a fragile and somewhat unassuming piece of paper that was almost always lost or inadvertently destroyed, but it bore the utmost importance in establishing legitimacy and value. Probably fewer than 10 surviving ingots still have their guias.”

Those ingots from the Serro Frio foundry account for about 10 percent of all known genuine examples today (21 of 218), and the 1832 bar in the Sedwick auction is the only Dom Pedro II ingot from that foundry ever offered at auction in the United States with its original guia.

The ingots and guias have often been missing from famous collections of world coins built by U.S. collectors.

The offering of the Louis Eliasberg Collection of World Gold Coins in 2005 featured four of these ingots, but none was from the Serro Frio foundry, represented Dom Pedro II or was accompanied by a guia.

Two examples in the R. Henry and Emory May Norweb Collection (sold in 1997) included an example created at Serro Frio, but both ingots were of João VI and neither had a guia.

The ingot in the Sedwick auction is flat and irregular, shaped like an extended rectangle approximately 69 millimeters long, 11 millimeters wide and 3 millimeters tall. Most of the stamped markings appear on one side, including the arms of the Empire of Brazil, the serial number, date, numbers indicating its weight as 1.375 ounces and 6 grains and fineness as 23 karats (.9583 fine) gold, and an intertwined monogram aab (for assayer Antonio Avila Bittencourt) within an incuse circle with beaded border. Three ribbed lines in the fields between the stamps are security cancellations to prevent further stamping.

The reverse shows a portion of the round seal for the Serro Frio foundry at the bottom. The seal, being wider in diameter than the width of the ingot, is incomplete, showing only a portion of its design details and the first two letters of the foundry’s name, se[rro].

The guias not only provided the documentation confirming their manufacture, but they were required to accompany the ingots, which could be confiscated if not accompanied by the document. As with other guias, the prescribed monetary value (in this case, 17,380 reis) is written on the guia and not stamped on the ingot itself.

The guia accompanying the 1832 ingot was pre-printed in 1755 but completed and modified by hand in 1832 to reflect the new regime and rates. The guia is folded though fundamentally intact, but riddled with small holes in one quadrant; the important details like number, date, fineness and foundry are still readable. Among other details, the guia indicates that the original owner of the bar provided 1.5 ounces of gold to the foundry, receiving back an ingot weighing 1.375 ounces and 6 grains. The 5 percent tax (called the vintena) amounting to 43.2 grains was retained by the foundry.

“It is hard to imagine a numismatic item with more patent history,” according to Sedwick.

Sedwick traces the provenance of the ingot back to a 1906 sale, and notes that researcher and author Kurt Prober, who studied Portuguese ingots and guias for decades, once owned the ingot in the late 1940s before selling it and then locating its guia. After buying it back, Prober reunited the ingot and guia and listed it in a 1948 dealer price list, the last time it was offered publicly.